Today, I welcome author David A. Kersten to my blog. Please enjoy this excerpt from his book The Freezer.

The past few days had been a whirlwind. Jack hadn’t even come to terms with having cancer, let alone everything since waking up in this strange environment. Before leaving him alone with his thoughts, Teague gave him one of the ‘clipboards’ he had been using. “I will show you more of how to use it later, but for now, if you want to make notes on any questions that you come up with, just write them on here as if it’s a piece of paper.” He showed him by writing a few words. As he wrote them on the surface of the pad, they appeared at the top of the page, neatly typed and even formatted properly.

“Jesus Teague, make this thing answer the phone and you could eliminate secretaries altogether.” He said it offhand, but two things hit him as the words left his mouth. The first was that this was no longer 1966 and he would no longer be able to use that time frame as a reference for pretty much anything he thought he knew. Second, it dawned on him that he could probably not even comprehend the way society changed in the years immediately following his death, let alone the changes since the war. He voiced his concerns.

It was obvious Teague didn’t want to get into it right now. “Look Jack, you’ve been bombarded with information, and it will take some time for your brain to process it all. Just write down any questions that come up and we can talk about them later.” Teague then walked him down the hall to another room. It was a bedroom, about ten foot square, with a small bed, a table and chair, a small set of drawers, and a sink and mirror like the one in the restroom, only this one had regular water faucet. The mirror opened to reveal a small cabinet built into the wall. It was filled with toiletries. He showed Jack how to use the light switch, and how to control the temperature in the room. “Feel free to explore the complex, or just go back to your room and lie down. This is a small community, and for all intents and purposes, everyone knows everyone else. Most people like to meet the latest reborn, so don’t be surprised if those you meet are interested in getting to know you. Just carry your datapad with you; with it we can locate you if something happens or contact you if we need to talk. I would probably recommend just getting some rest if you can, however. It is amazing what the brain can do subconsciously to process stuff like this, especially when you are resting. If you need me for anything, just tap the icon I put at the bottom left of your datapad.” He pointed to a little symbol that looked like a stethoscope wrapped around a red cross.

“Is that what you call people like me? Reborn? And this is called a datapad? And the symbol here is called an icon?” The terminology was completely new to Jack. “I can see that I’m going to be learning a new language.” He said it in a lighthearted fashion, but he knew it would be tough for the first few weeks.

“Jack, I know it will be difficult, and the learning curve will be high, but I can assure you that not only will you pick it all up fairly quickly, but you will be a great asset to us. Is there anything else before I leave you? I have some work to attend to – saving humanity is a busy business.” Teague chuckled at his own grim humor but Jack’s attention was elsewhere. His mind was already wandering back to the many subjects they had discussed.

“No, no, I think I can handle it. Thanks Teague.” He didn’t even notice the man leave. 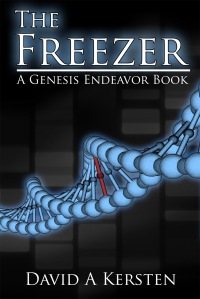 1966 has been a bad year for retired Army officer Jack Taggart. Still reeling from the loss of his wife and daughter, a visit to his doctor reveals the worst possible news: cancer. Going in for surgery, he is uncertain if he can, or even should, face the fight for his life. When he wakes up to find over three hundred years have passed, an entirely new set of challenges lay before him. Now he must fight to save a devastated world and the few people who remain on this scorched planet. His first battle: to figure out where he is, how he got here, and how it all ties back to the Freezer, a 20th century underground military facility that could very well be the key to the future of humankind.

David Kersten was born in Minnesota but spent most of his life in Montana. An IT Manager for his family’s business, David enjoys just about anything having to do with technology. He also enjoys creating things, whether it involves writing fiction, writing software, woodworking, carpentry, or electronics. As an avid reader since the age of 11, one of his long term goals was to try his hand at writing, and as with everything, when he dove into it, he submerged himself for many months. Although he enjoys many different fiction genres, his first novel, “The Freezer”, is set in his favorite genre, Post-Apocalyptic Fiction, and is a proud accomplishment for him.

When he isn’t writing or working in his shop, he can be found spending time with his 3 children, sitting at a computer playing games, enjoying a good television show or movie, or out with friends at the bowling alley or favorite bar.

He intends to continue writing novels and has already started on a sequel to his first book.

You can find out more about David on his website.

You can purchase The Freezer on Amazon.