This past Saturday, the kids and I went olive picking at my kids’ school. Yep, you read that correctly. There is an olive orchard at their middle school. It has been there since the early 2000s when the school decided to enhance their outdoor learning area known as History Hill.

They decided to add an olive grove to provide a history lesson for students. In ancient Greece, olive oil was the basis for trade and used in religious ceremonies. Its value is comparative to modern day petroleum trade. What better way to liven up a boring History lecture than to have the student traipse out to History Hill and see the olive grove and harvest them for sale.

What started out as a 20-tree donation has grown to over 90 olive trees. And every fall, students, parents and teachers all help collect the purple, black and green olives.

Lexie (in the pink) collecting olives.

On Saturday, I’d say there were over 130 students and parents on hand to help. Even though the forecast had threatened rain, it turned out to be a nice morning with some cloud cover keeping the Texas heat away in the morning.

This was the first year the kids and I went to olive pick even though it is Jase’s third year at the school. A majority of the students helping are in the Young Historian’s club, but they usually get help from other groups such as Student Council, PALS, and National Junior Honor Society (NJHS) as well as parents and other students including some who attended the school in the past and are now in high school.

Jase is in NJHS and could use the service hours, and Lexie’s social studies teacher promised extra credit so I got both kids up early (they grumbled about rising before 7:30 on the weekend). Of course once there and picking olives, they had a great time with their friends. 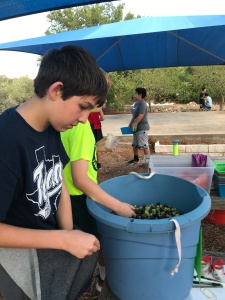 Jase dropping off the olives he picked.

Once all the olives are picked, they are sold to an olive press in a neighboring town which sells the oil and gives a potion of the sales to the school. The money goes back into maintain the grove and provides funding for the school’s annual History Faire and Cultural Fest, which is meant to bring history to life for the students. It features hands-on activities as well as historical re-enactors, music, dancing, a medieval tournament and even military demonstrations – all on History Hill.

The school makes anywhere from $400 to $1200 each year depending on that year’s crop. Last year was a good year but this one was a little less productive due to a dry summer. But as the school will tell you, it isn’t about the money. The olive grove provides educational and social experiences that the students would not get by merely being in the classroom.

Sometimes things don’t turn out like you planned. And when it comes to writing that is often the case. Sometimes what you think you are going to write goes a total different direction.

This happened to me twice in the past week. The first time was when I was writing my post for this past Monday. I planned to write about an incident regarding a stranger approaching a student on his way to school. Since there has been an increase in stories of human trafficking in my city, I figured that is what I would be writing about and even looked up some facts and statistics.

But when I began writing, I realized my reaction to this incident was not the same as those of my neighbors who were more alarmed than I am. They resorted to ultra-protective parenting mode and declared that our children need to be protected and shouldn’t be walking to school. Once I realized this was what I felt passionate about, I addressed that rather than writing about the possibility of human trafficking happening in my neighborhood (which I am by no means worried about).

The other incident happened as I was finishing out a scene in my latest work in progress. One of my main characters is worried about not being able to protect his friends from a dangerous situation. I wanted a conversation between him and another character which I hoped would reassure the main character that he is doing as much as he can.

Now, I don’t follow a strict outline so I began writing with just that vague idea of where I thought the conversation would go. I figured it would be brief, but you know you can’t predict what characters will do if you give them free rein. I let the conversation flow, going further than I expected and revealing a bit of backstory. But the conversation felt natural, like this is what the characters would actually say.

As the writer, I could have forced the conversation to be what I thought it should be. But it would feel contrived and in the end, I probably would have had to re-write the section as it would have an “off” feel. I let the characters be their true selves and that should make the story better. I’m still on my first draft so I’ll leave in the scene as it developed. Whether it stays that way in the final draft is yet to be seen.

What these two incidents reminded me of is that you can’t always plan your writing. Sometimes you just need to write what works for you. Sometimes you need to throw your characters into a situation and see what happens and not stick with what you think will happen. You never know where it will lead you. And it just might turn out better than whatever you had imagined.

This is how you do it: you sit down at the keyboard and you put one word after another until its done. It’s that easy and that hard. ~ Neil Gaiman

A black Toyota pickup truck slowly pulls up next to the middle schooler walking to school. The man slowly rolls down the window and offers the boy a ride. The boy shook his head and continues to school. Later that evening he mentions it to his parents who alert the school and city police departments.

This incident is what sparked a letter from the principal of my kids’ school. It was then posted on NextDoor, a social networking platform designed to connect local communities and neighborhoods. And then the story was picked up by the local news stations.

No new information has been released about the incident, but two other incidents have been reported in our area. In one, a child ran up to a neighbor when he felt scared about a van following him. The other one involved a driver of a blue truck asking a student where he was going. 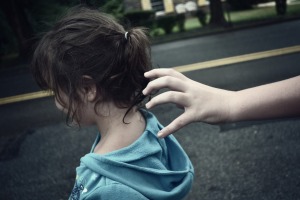 In none of these incidents did anyone try to grab the student. Yes, they are suspicious and perhaps alarming to some. And I certainly agree we need to talk to our children how to handle these situations, but as with many other events, neighbors have blown this out of proportion. They are calling for parents to stop letting their kids walk to school – even shaming those who let their kids do so.

When my kids were in elementary school, I walked with them to and from school. Sometimes the two of them walked home together when done with after-school activities. On a rare occasion, one of them would walk home alone. Jase was in the third grade when I started letting him do a few times.  It was funny though because I would get texts from neighbors letting me know he had just passed their house. It was reassuring to know that others were watching out for him even though he didn’t know about it.

Ever since Jase started middle school, he has walked to and from school. He carries his backpack or zippered binder as well as a lunch box and his violin. Yes, he is loaded down, but it is a short walk to the school. But parents online are shocked that some of us parents are making our students walk loaded down when we could be driving them to the school.

Now, I could drive my kids. I don’t have a job that would prevent me from dropping them off or picking them up. But I see no problem with them walking. I am not paranoid that they will be abducted on that walk. Most of their walk is on a busy street where no cars would stop. Plus there is a police officer on duty. He can see them on most of their walk. After they leave the busy street, it is only 2 houses down our street to our house.

Nope, not worried at all. But to read the messages online, you would think kids in our area are being snatched all the time. Ok – Texas is a “hot” zone for human trafficking according the local news, and I will admit that there are other areas of the city that I would be more concerned about my kids walking to and from school but not here. According to the National Center for Missing and Exploited Children, less than 1% of abductions are by non-family members. That means the chances of a stranger snatching your child from the street is extremely low.

Yes, it has happened but most likely won’t. Some of those parents just don’t want to take that chance. I understand and respect that decision. But it doesn’t mean they should tell me that my children, ages 11 and 14, shouldn’t be able to walk or be outside alone. I think they should be able to walk to school or even a friend’s house. On the way to school, they are walking in a group. I know their route. They know not to get in stranger’s cars – even Lexie who I always said would go with anyone who had a puppy. They have their cell phone on them – ready to call me or snap a picture of anything suspicious. I’ve talked to them about the situations, letting them know to be vigilant, to stick together and report anything that concerns them. They are fine with that and so am I. So for now, I will ignore those comments on social media and let my kids keep walking to school.

But when people say ‘Did you always want to be a writer?’, I have to say no. I always was a writer. ~ Ursula LeGuin