You’ve repeated your request a thousand times – or at least if feel like that. But there sits your child ignoring what you just told them to do. The funny thing is that even though we know our kids may tune us out and choose to focus on their TV program we keep doing the same thing. Sometimes it feels the only way to get the kids to listen is to raise my voice. Then I feel guilty about yelling at them.

What needs to change is my behavior. I mean doing the same thing and expecting different results seems ridiculous. So I turned to the Internet to look for some new ideas or maybe just a reminder of things to try. Here is some of what I found.

Now like I said, a lot of these are advice that I have heard before, but sometimes it bears repeating again and again. Maybe this time I will be listening.

Today, please welcome fantasy author Loren Weaver to my blog. She shares a little bit about the creation of her Victoria Novak: Paranormal Division series. The second book, Archangel’s Salvation, was released in August.

I was born in Texas, but I call Georgia home. Currently, I’m living abroad in Ecuador while working in both Ecuador and Brazil.

I started writing when I was eleven, and I’ve never gone back. I always loved reading, and I wanted to be a part of bringing that escape to others. So, I guess you could say that I was inspired by hundreds of other authors bring life to their stories.

I just released my novel Archangel’s Salvation, which is the second book in my Victoria Novak: Paranormal Division series. The first one is called Havoc’s Cry. The series follows Tori on her adventures as an agent for the FBI’s paranormal branch. Books three and four are already in the works and should release late 2014 and early 2015.

My titles are based on Shakespeare quotes, actually. For example, Havoc’s Cry is from the quote “Cry Havoc and let slip the dogs of war” which has a double meaning since my main character is best friends with a werewolf!

I don’t ever base characters on real people, because then I’d feel bad when terrible things happened to them. Which they almost always do in my books. Strangely enough, one of my good friends has the same name as one of the characters, but I had already written the character before my friend came into the picture!

I came up with the ending towards the beginning of my plot outline, although some of the relevant players changed from the original idea. I had to separate the original idea into the first three books, since it was too much for one!

I work in the field, so I can’t ever be in one place to write! For me, if I have a laptop, I’m able to write. I don’t even need internet to keep me entertained in my story land! But if I get a choice, I always like a good view for inspiration.

I’m a black belt in Tae Kwon Do and a Master SCUBA Diver, and it’s my dream to set foot on all seven continents before I die. 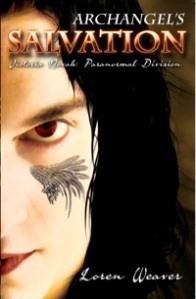 When she goes to the Coven Master for help, he gives her a vampire liaison. Gabriel, a 400 year old vampire with angel’s wings painted on his face, is violence on a leash. Tori and the team chase leads back to the new club Transylvanian Travesty, owned by a vampire that makes Tori weak with his power. But is he really involved in the killings?

A new vampire murder, paranormal politics, and police work. All in a normal day. But now, Gabriel’s ready to be free, and Tori may be the only way to ensure Archangel’s Salvation.

Loren Weaver is an engineer for an oil company as her day job. She loves crazy sports and has her black belt in Tae Kwon Do, master SCUBA diver certificate, and motorcycle license. Although engineering pays the rent, she writes because she loves to hear and to tell a good story.

You can find out more about Loren and her writing on her website.

You can purchase Archangel’s Salvation on Amazon.

Foreshadowing is using suggestive words or phrases that give hints of future events in the story. It can be used to build suspense or to prepare the reader for impending events without revealing too much of what is to come.

Without foreshadowing, readers have no expectations because you haven’t provided them with any. Since many beginning (and even some veteran) author struggle with foreshadowing, I wanted to offer these tips.

Foreshadowing can be a tricky business and how you use it – heavy-handed or subtle – is up to you. The bast way to learn about foreshadowing techniques is to observe them in the books you read and movies you watch. And of course by practice in your own writing.

School has started once again. I am not one to insist my kids have extracurricular activities but if there is something that they want to do, I will let them tackle one new thing – be it a sport, club or whatever.

This year, Lexie has chosen to try soccer. She remembers going to games and practices when Jase tried soccer when he was five. I signed her up for the same program through the YMCA. She is on an all-girl team of five and six-year-olds. Her coaches are the parents of one of the other little girls. They coached their daughter’s team in the spring and have coached their son’s team before so they know what we are doing.

Before the first practice, we had to go get the necessary equipment – shin guards, cleats and black shorts. We already had a size 3 soccer ball. The YMCA provides the jersey and matching socks. In the case of Lexie’s team they have yellow as their color. They choose bumblebees as their team name.

The first practice was supposed to be on my birthday but we got to the field only to find out that they were cancelling practice due to a rainstorm that was approaching. Instead the coach met the girls, gave them their jerseys and went over a little bit of what their first game would be like. That first game was the next morning at 10 am!

Yes, they had their first game without ever having a practice. They did get to run through a few drills before the game. But they ended up losing 1-4 against the other team. Lexie had fun though she wasn’t use to being bumped or hit with a ball. She held up well until someone elbowed her in the nose. Luckily that happened in the fourth quarter.

As for Jase, he stuck with karate for the fall. He is currently a first degree purple belt and will be testing this November to become a second degree purple belt. He began karate almost three years ago. I think he does better at an individualized sport like karate than a team sport such as basketball or soccer.

Every season, he is required to participate in a karate tournament. He has yet to win a round during tournament and I know this doesn’t make him happy. He is good at techniques but really doesn’t have the killer instinct for tournament. He is not aggressive and typically falls back into the same few kicks which are his favorite.

But even without his success at tournament, Jase loves karate. He even performed some karate moves for last year’s school talent show. He included some karate weapons for his demonstration. In class, they do not learn about the weapons. They offer camps twice a year where the students learn to use long or short swords, tonfa (police batons), nun chucks, throwing stars and other weapons. At the end of the camp they sell some of the practice weapons.

I am glad the kids are liking their sports this Fall. I don’t know if Lexie will want to continue with soccer. She has tried gymnastics and dance before this and neither of those activities were ones she wanted to stick with. But I am sure Jase will stick with karate for at least a little while longer. He often says he wants to become a red belt which is the highest rank he can attain in the junior level.Until then we will just enjoy going to practices, games and tournaments with the kids.