I even had a topic for today’s blog, but I just ran out of time to actually write it. Here are some of the reasons why…

I am in the midst of organizing our biggest PTA fundraiser of the year – a four-hour long spring festival. I’ve been searching through a mountain of resumes trying to weed out the horrible ones so my husband can find an new office assistant.

I’ve had a cold since last Thursday. When I am not napping, I have been doing all those other things.

It is the time of year for each PTA to propose a budget for next year. As treasurer, I am in charge of the one for the middle school, but then again as president (and former treasurer) for the elementary, I had a lot to do on for the elementary school PTA budget too. 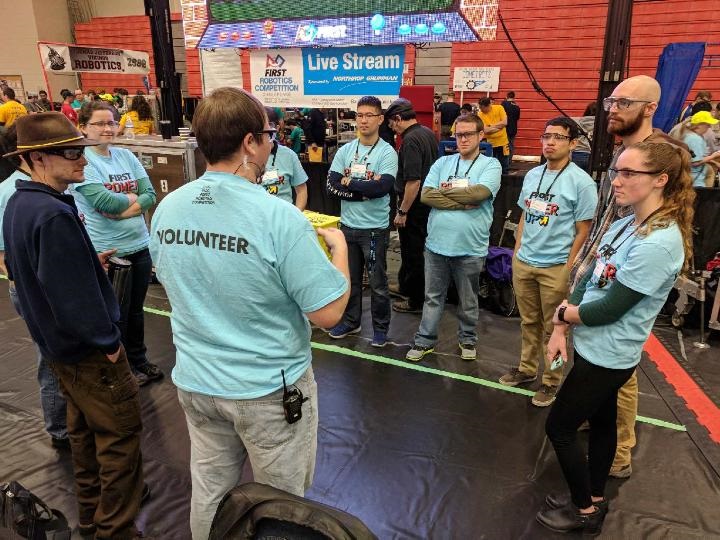 I spent all day Saturday at a Robotics competition my daughter was competing in. They needed volunteers and since I don’t seem to know how to say no….

Yep, gotta make sure the kids get that stuff done and off to violin lessons for Jase.

The A-to-Z challenge is up next month so I will have to save my intended topic for after that.

“No act of kindness, no matter how small, is ever wasted.” ~ Aesop

Not all children get an allowance but one of the reasons we began giving Jase and Lexie one is to teach them about money. They need to learn about saving and not spending more than you have/make. Each week, they get a small amount put on their FamZoo debt card.

While they do not get paid for general chores such as keeping their room clean, putting away laundry, or emptying the dishwasher, we do offer them other opportunities to earn additional money such as mowing the grass or working at my husband’s law firm.

Jase is good about knowing how much he has in his account and carefully considering a purchase beforehand. He likes keeping a larger amount of money on hand and often is willing to do extra work for more money.

Lexie on the other hand is the “I have money, I should spend it” type person. Almost as soon as she gets her allowance on Saturday, she wants to spend it. We had to set a requirement that she keep at least $5 in her account or I am sure it would often be at zero. Especially with her, I want her to learn at a young age to live within her means and to always keep some savings on hand.

This past summer, I sat the kids down and we went over household expenses and why you need to have money in savings. Lexie is a dog-lover so pointing out that she might need money to pay for an emergency with her favorite pooch did have an impact. But, at the age of 10, it is hard to imagine those type of worries when all she wants to do is buy something to make her happy now.

And that impulse is where she went wrong in February. The good thing about the debt card is that once they buy something at the store or on Xbox, the money is immediately withdrawn. They cannot spend more than they have in their account. It will simply decline the purchase.

But when purchasing on iTunes, we have Family Sharing set up so that if one of us purchases an app, we all can download it and not have to buy it again. That worked well when the kids bought games they both wanted to play. The problem is to do have the Family Share, we can only list one credit card on the account. So, when Lexie purchases something, it doesn’t automatically get withdrawn from her account. She must tell me about the purchase, and I take the money out of her account. So, the accuracy of her FamZoo account is reliant on her telling me about her purchases in a timely manner.

One day in February, Lexie had $21 in her account. In a buying spree of purchasing in-app items, she ended up spending $26. Problem one is that she spent more than she had. Problem two was she didn’t tell me about the purchases. Two days later, she went on another spending spree and bought $30 worth of stuff.

Now, she did tell us about the last purchase – sort of. She came in saying she bought two thing that were each $4.99 and then casually mentioned that earlier she had bought a few other things. She made it sound like she spent about $20 worth of stuff. When I looked up her purchases, I realized she had spent WAY over what she had. Even if she had checked her account before she made her purchases (which she didn’t, she had been going off her memory of what was in her account), in both instances she shouldn’t have spent the amounts she did.

I immediately suspended her FamZoo debt card. But that only would stop her from making a purchase on Xbox or at a store. It wouldn’t stop her from buying stuff from the iTunes store when she was on her iPad, so I took away her App store. She could no longer even download free apps.

So, after many discussions about spending and her doing extra work – even going into my husband’s work for a full Sunday afternoon – she paid back what she had spent. And after two weeks or so, I unlocked her account which had about $13 in it.

Now can I say that she learned her lesson? I don’t know. We will have to see if she makes that mistake again. We have warned her that there will be stiffer penalties if she does that again. But I can say that she has not changed her spending ways. Within a few days, she had her account down to the $5 minimum required balance. But at least this time, she came to me BEFORE she made any of her purchases to make sure it was okay to do so.

Hopefully, over time this lesson will sink in before it is something more important like rent or food that she needs to buy that she can’t because she has spent all of her money on other things.

This year is the 10th anniversary of the A to Z Blogging Challenge, and my sixth year doing the challenge.

For those of you, who haven’t heard about it, the A to Z challenge is a challenge for bloggers to post every day in April (except Sundays). Every day (Monday through Saturday) is matched with a letter of the alphabet. On the first day, you write about a topic that begins with A, the next day B and so on.

Now the organizers suggest you come up with a theme to help you get through the challenge. The first year, I didn’t pick a theme. The next year, I did a theme of TV shows followed by characters in 2016, antagonists in 2017 and last year it was songs about magic.

The key is to pick something that you will be able to find something for each letter. There are some hard letters – Q, X and Z in particular.

As a fantasy author, I like to connect my topics to something related to writing (characters/antagonists) or fantasy (magic). This year, I have chosen to write about character flaws. It doesn’t matter if you are writing about your hero or the villain – every character needs a flaw or two (or three or more). So, from being bossy to greedy to vain, I will cover flaws your character might have.

Those of you who want to know more about the challenge or to sign up, click here. And you can look for my A to Z challenge posts about Character Flaws beginning April 1st.

“Be kind, don’t judge, and have respect for others. If we can all do this, the world would be a better place. The point is to teach this to the next generation.” ~ Jasmine Guinness