Today, I welcome fellow fantasy author Travis Simmons. Today he is talking about A Lament of Moonlight and and his upcoming release, Desolation.

This year? Honestly I knew that I was a writer, but I didn’t start feeling like a writer until I started talking about my writing to people.

Not many at all. I think my most recent novel DESOLATION (which will be out June 11th) played on the emotions of separation I was feeling at the time of writing it.

DESOLATION is facing the last round of edits on my end, and then the cover art and interior formatting will take place. I can actually share with you a blurb of the book.

“Asher St Paul thought it was just a typical zombie apocalypse like in the movies, until the necromancers crawled out of the woodwork. Since the undead have chased the living into hiding, the necromancers are able to roam freely in a new America of their making. Asher is seeking safe harbor. The need for safety is what drove him from his home in Philadelphia Pennsylvania before it was shelled. He has searched from quarantine to quarantine, always finding them overrun with zombies until he hears of The Refuge, a military compound in Binghamton New York.

With his family and lover lain to rest by his own hand, he has nothing left to lose and gives everything he has to reach the safe haven. But questions arise when he reaches The Refuge, mainly, how has he been able to sustain multiple zombie bites and not change? He thinks he has found safety in the military compound turned quarantine, but he was wrong. Even now there is a necromancer trying to make The Refuge their kingdom of the dead.”

Desolation is about so much more than zombies though. In this telling of the apocalypse, necromancers are the real monsters.

I continue writing because the characters refuse to stop chattering to me. I keep writing because I am not satisfied yet, I have this need to tell stories, and there are so many to tell, and they just keep coming!

Research for a fantasy novel is surprisingly extensive for me. I like to play on tales and legends from our own world in hopes that the novel is more realistic for the reader. I tend to research monsters and myths more than anything, and use those as a backdrop for the story and as creatures you meet along the way. Obviously I like some pretty obscure creatures as well as more traditional ones.

If is part of a series, what is the next book? Any details you can share?

A Lament of Moonlight is part of The Harbingers of Light series. The next one is A Symphony of Starlight and it takes place on the moon of their world O where darkness has already settled in and taken over.

I think Abigail, she has some pretty interesting things in store for her, and she is just a fun character anyway, she is stuck between believing in strange things because she is still young, but trying to be an adult because she is getting to that age where she is starting to lose her fantastical musings she held as a child.

I assume this means any world in any book? Harry Potter for sure. Reading those books I really wished it was real and I was a wizard. How silly is that?

At the moment I have a writing table set up in my room, and some pretty good things come out of me there. I also just bought a digital recorder so that when I get random thoughts I can record them. I imagine walking this Spring and Summer will turn out some pretty amazing ideas.

Right now I am pretty fond of David Eddings. I have always loved his work, but I really wish they were available on kindle, because I would so buy all of them!

What book are you reading right now?

Right now I am reading several books, the most recently read are LUMEN by a friend Joseph Eastwood and A Spell for Chameleon by Pierce Anthony.

David Eddings and Mercedes Lackey. They have been really detrimental in shaping what I want to write. 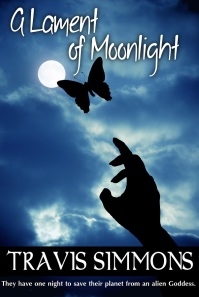 “O is a land of magic and mystery. A place where, in ages past, there was a storm of fire from the heavens. At ground zero, the people were deformed, their shadows stolen from them. Their shadows were changed by the magical storm, and created a new demonic race called shadkin. The shadkin took up residence at the most magical, most holy places across the world, trying to choke out the light, and usher in a new darkness.

In the Fey Forest, one of the last holy bastions, the shadkin are winning.

When Abigail, Melvin and Ruby find an alien butterfly at school, there doesn’t seem anything fateful about it. But when the butterfly escapes and they chase after it they are lead on a dark adventure full of magic, shadkin and danger. When they meet a being from the moon she tells them about their ancestors, pilgrims from a foreign land, and the Godslayer they brought with them; a weapon that a dark goddess is searching the cosmos for. What is more, they are the harbingers of light, people chosen to champion in the light against the darkness.

They have no time to lose. The dark goddess is slipping through the stars, ever closer to their home world. They have one night to find the root of her power and destroy it before she finds them, and the mythic weapon Godslayer, that will insure her dominion throughout the universe.” 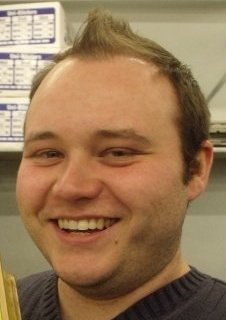 Travis is the author of The Bonds of Blood, the first book in his epic fantasy series The Revenant Wyrd Saga. He has also written a young adult novel called A Lament of Moonlight which is book one of his pre-apocalypse series The Harbingers of Light. He is currently seeking publication for the first book of a third series, a zombie novel called Desolation. When he isn’t writing he is helping his family and trying to live a normal, under the radar life. His interests lie in cooking, gardening, green living, and human rights advocacy. He is a huge supporter of the Trevor Project and all agencies that seek to preserve natural resources and protect pets from abuse.

“Unlike most authors, I have not always loved reading and writing. I hated it until I was in 7th grade. My teacher wanted us to read the entire semester. She told me to go to her book shelf and pick out a book that I was interested in. I found one of my first loves: David Eddings’ Pawn of Prophecy.

I think it was at that point, getting lost in a book I love to this day, that I knew I had to do this. I had to create the same magic for others that Mr. Eddings created for me.”

You can purchase A Lament of Moonlight on Amazon and Lulu.