Ann5 looked at the Education (Ed) screen. She was one of the brightest children on the Moon, the only child of two scientists, and when she grew up, would be a scientist herself. As such, she was receiving the best available education. For her elective course, she had chosen an unusual subject. The subject was not popular, but for some reason it interested her. Its title was “Earth Animals” and just now, as she studied the creature pictured on the screen, she was very puzzled. Never in her wildest dreams had she ever come close to imagining anything like this.

The creature was yellow, very small, and it had no mouth or arms. There were two eyes, and two very strange looking little legs of sorts, with three toes each. The caption above it said “Class Aves Canary.” Reading further, she saw it was a ”pet.” But what was a “pet?” In addition, and even more amazing, she read that it sang! About where its mouth would be was an odd structure called a “beak.” How could it sing, or eat, without a mouth? Even stranger, she read that it could fly! How could it fly without any propulsion system? She hadn’t the slightest idea about any of it.

The next picture was also very strange. It showed a larger, more boxy type creature. Apparently it came in different colors, and, there were males and females with pictured of both! Ann5 had never associated sex with anything other than people, and the idea that this animal also came in both sexes, like people, was simply amazing. And, it “laid eggs!” Even more astounding, the “eggs” were used as food! And even more astonishing than that, the creature itself was used as food! It was called a “Chicken.”

Ann5 was extremely puzzled and confused. The diet on Moon Base was by necessity strictly vegetarian, and there were no animals of any kind- she had never even seen an animal, air was too precious for anything but humans to breathe it. The very idea that an animal being could be used as food was entirely foreign to her. She simply could not grasp it. Yes, she would have to find out more about “canaries” and “pets” and the reason why people kept them.

(In the next chapter she meets a Canary named “Bob” who takes a liking to her). 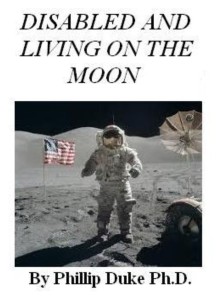 The Moon’s nearness and low gravity facilitate transportation between the Earth and its Moon, making it the location of choice for an off-world colony. The Moon’s low gravity is only one-sixth that of Earth, so a person weighing 180 pounds on Earth would weigh only 30 pounds on the Moon. Their greatly reduced weights makes life possible for disabled persons who could not survive on Earth, such as persons with badly damaged hearts. Mobility challenged persons of all kinds would find life much easier on the Moon.

The Moon’s surface is airless and people would live in the Moon, not on it. At first the Moon Colonists would use the spaceship’s electrical power to dig underground living quarters, while soybean and other food plants under grow lamps provide oxygen and remove waste carbon dioxide. Everything is necessarily recycled, nothing is wasted.

Life in the Moon is very different from life on Earth, The colonists do not experience the Sun, or rain, or wind. They are always aware that outside conditions are hostile to life, and that survival has certain strict requirements. Ann5 is a young Moon Colony inhabitant, and we experience life through what she experiences. Ann5 has read about but never seen an animal, and while becoming acquainted with a pet Canary named Bob. she has a meaningful experience.

This is the first and only book about the important advantages to disabled persons of living in the Moon, and as such it is a pioneering attempt to make people aware of these important advantages. Man has already walked on the Moon, driven a Moon Buggy on its surface, and returned. Present-day technology makes the Moon Colony possible, it is only necessary to plan the trip, and go there..

This book also describes the very recently discovered and little known Space Warp Propulsion System. Assuming its great promise is fulfilled, then interstellar space flight will become practical, as well as very easy travel to the Moon and back.

Phillip Duke Ph.D. is an American author who has personally written, proofed, edited, formatted, created and published the texts and covers of his 41 Ebooks and Estories. They are available from Amazon.com and Dratt2Digital.com. They are listed by genre, briefly described and linked to Amazon.com on his website. All his writing is very reasonably priced, the most expensive Ebook is only $2.99. Dr. Duke says he writes for his readers, not money, and only on subjects that deeply interest him.

Dr. Duke always likes to hear from his readers and interested persons. You are invited to contact him by email at drpduke@gmail.com.

Check out all of Dr. Duke’s books on Amazon.