Please welcome author Rob Bignell to my blog. His latest book, Storystarters: 200+ Writing Prompts That Lead To Actual Stories, a guidebook for aspiring writers, came out this week. You can purchase it on Amazon.

I’m a long-time professional editor who owns and runs Inventing Reality Editing Service. I’ve helped more than a hundred novelists and nonfiction authors obtain their publishing dreams at reasonable prices. I’m the author of the “7 Minutes a Day…” writing guidebooks, the nonfiction “Hikes with Tykes,” “Hittin’ the Trail,” and Headin’ to the Cabin” book series, the literary novel “Windmill,” and more. My latest book – released just this week – is “Storystarters: 200+ Writing Prompts That Lead To Actual Stories”. Since 2011, at least five of my hiking guidebooks have topped Amazon.com bestsellers lists. Several of my short stories in the literary and science fiction genres also have been published. I hold a Master’s degree in English and a Bachelor’s in journalism, have taught college writing classes, and am an award-winning publications editor and writer, having worked in San Diego and Palm Springs, Calif.

In second grade, I used to play “Star Trek” with one of my friends, whose mother was from Vietnam,  One day my friend told me that he wished just once Sulu would get to save the day. I wrote a story that night on penmanship paper in which Sulu saved Captain Kirk and gave it to him the next day. He loved it, and I was his personal hero. For the first time, I tasted the power of writing. Despite that, I still wanted to be something other than a writer. I planned to be an astronaut, but then in fifth grade had to start wearing glasses. At the time, you couldn’t be a jet fighter pilot if you wore glasses, and the only way to become an astronaut was to fly jets. So I decided I would write about being an astronaut.

Almost everything in the writing guides I’ve penned comes from advice I’ve dispensed as an editor to my writing clients. I’ve discovered that writers tend to ask many of the same questions, and they ask a lot of them! Eventually I started collecting those answers and assembling them into books. My answers always come from my own experiences. I’ve also asked those same questions and spent a lot of time in the reading guidebooks, examining stories, and trying them in my tales to find the answers.

I’ve always got several books going. For writing guidebooks, I’m working on a primer for indie authors about how to treat their writing as a business – if they need to incorporate, how to file taxes, stuff like – and then some guides of how to market their books via pubic presentations and various social media. Though an editor, I get those business-oriented questions a lot. As an author of hiking and writing guidebooks, I’ve asked them, too, and so had to figure out the answer often even before a client asks me.

I am a full-time book editor and writer. My time is about evenly split between editing novels/ nonfiction manuscripts and then writing guidebooks, primarily about how to be a successful self-published author and on hiking. My work day always is different, based on what I’m editing and what I’m writing about. One day I may be editing a science fiction novel set on another planet while writing about how to properly use commas. The next day I may be editing a nonfiction book about how to improve sales strategies while writing about a hike I took past waterfalls en route to an 11,000-foot elevation summit in Colorado.

What is the best and worst advice you ever received? (regarding writing or publishing)

The worst advice I’ve received in the past few years is that if you don’t go the route of traditional publishing, you’ll never make any sales. Perhaps that’s more of a sentiment but the advice is implied: get a lit agent, let her get you a publisher, and you’ll be successful. The numbers bear out quite the opposite, though. Frankly, if you’re not self-publishing, you’re just giving away your earnings.

Probably the best piece of writing/publishing advice I’ve ever heard is “plan but be flexible.” Always outline, always draft, always develop and implement a marketing strategy but also always be ready to dump what’s not working. If you feel good about the story you’re writing but it doesn’t match your outline, then toss the outline rather than force your story to fit it. If Facebook isn’t selling books for you but Twitter is, trash the former and out more effort into the latter. Don’t stick with what isn’t working.

For me, it’s knowing that writing is my destiny. It’s more than just a hobby. It is reaching for my full potential; it is those moments when I feel most self-empowered. When writing, I experience fulfillment and bliss. I feel successful and enjoy affluence, perhaps not always monetarily but certainly I am showered with the emotional and intellectual wealth that a creative pursuit brings. When writing, I feel like I am doing exactly what I was placed on this Earth to do. Writing is meaningful, and I have purpose. It is living my dream.

I’m definitely an outliner. I don’t always stick to the outline, however, just use it as a guide. Should the scene I write not quite fit the outline and I can see a new direction to take the book, I’ll revise the outline. A lot of writers say they don’t outline, but I don’t believe most of them. A writer may not place the outline on paper, but it’s up there in their head. When a writer doesn’t outline, they may pen a great descriptive paragraph or dialogue exchange, but they very rarely have a story with direction. When editing my clients’ works, I always can tell which ones outlined and which ones winged it. The latter inevitably end up doing a lot more rewriting. 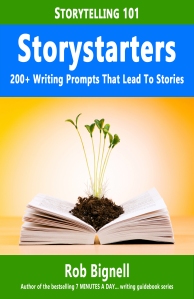 My latest – which just came out this week – is a guidebook for aspiring writers or those established writers who are stuck for ideas: “Storystarters: 200+ Writing Prompts That Lead To Actual Stories.” The book approaches writing prompts from a whole new perspective – by presenting conflicts for characters to solve. It’s divided into 52 different topics with four writing prompts for each one, say man vs. nature, man vs. man, man vs. society, man vs. God(s) and man vs. himself.

For example, under the topic of “Aging” is the following prompt: Our protagonist, now retired, decides to move back to the place of his childhood and renovate an old residence that nature is quickly reclaiming. As he struggles against the damage that Mother Nature has wrought (pipes broken from overgrown roots, weeds, rotted roof that leaks, etc.), how does he come to terms with his own aging, which is ravaging his once virile body?

That is a prompt a writer actually could work with and take a lot of different directions. It’s a “storystarter.”

Among the greatest challenges facing writers is coming up and developing a fantastic story idea. The problem isn’t that writers have a shortage of ideas, just that many of them are not fantastic, as currently formulated in their heads. They sense that and so sometimes face a mini-episode of writer’s block. Being proactive, they turn to writing prompts – a single word, a phrase, a situation, or a picture – to spur their imagination, to inspire them. Often, writers unfortunately find that while these prompts result in a lot of creative output, they still don’t result in a story that is publishable.

As reading through books on writing prompts, I found most were useless for anything beyond journaling or introducing students to certain modes of writing, such as descriptive writing or character building. To generate a story, a new approach to writing prompts was needed.

I began to wonder what this approach should be. After a while, I realized that the bad prompts almost never led to an actual story, as the prompt did not focus on what a story is about: resolving a conflict. Thus was born this book.

I scoured through summaries of the greatest fiction books of all time, not just in literature but in today’s popular genres, writing down the major conflicts in each one. I then organized those conflicts into topics and without thinking what story they originally came from, devised two- or three-sentence prompts that could work for a story.

Using conflicts of previous novels doesn’t mean you’ll end up copying that story. “Obsession” for example is a theme of the conflicts in a number of great novels, such as “Moby Dick,” Wuthering Heights” and “The Great Gatsby,” and those are quite different stories. The fact that the conflicts inherent in such a broad theme have been addressed in a number of ways, makes it an excellent topic for a book. Advising writers, who are seeking inspiration, to write about a conflict arising from obsession is much more fruitful than asking them to write about what they find in a box that was buried in their backyard.

If the book is successful, I’ll write a follow-up in which I present mostly new topics. I’ve got a lot leftover from my research, often a couple of prompts per topic that could be completed (to get four conflicts per topic).

Rob Bignell is the owner and chief editor at Inventing Reality Editing Service, which meets the editing and proofreading needs of writers both new and published. He is author of the nonfiction “Hikes with Tykes” guidebooks as well as a collection of poetry, “Love Letters to Sophie’s Mom”. Several of his short stories in the literary and science fiction genres also have been published. For more than two decades, he worked as an award-winning journalist, with half of those years spent as an editor. In addition, for seven years he worked as an English teacher or a community college journalism instructor. He holds a Master’s degree in English and a Bachelor’s in journalism and English.

You can purchase Storystarters: 200+ Writing Prompts That Lead To Stories on Amazon.