For many years, I wanted to change the laminate counter we had installed when we built the house. But my dreams of a kitchen remodel when out of the window when my husband started his own business.

So to satisfy my needs for new counter tops, I spent $580 and spent five days painting the laminate. It looked good, but the durability of the paint job proved to be less than stellar, and I had to do a couple of touch-ups over the past three years.

This year we received a large tax refund, so we knew right what we would do with it. We would replace my painted counter tops with quartz ones. We knew which quartz color we liked so it was merely a waiting game until the right sale hit.

Finally in July, we rushed down and placed our order. We stayed right in our budget. That was until the guy came out to measure our kitchen. While my measurement we almost spot on, he had some suggestions. 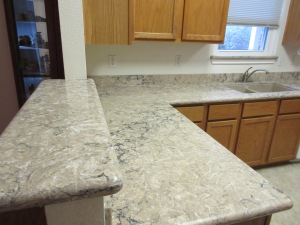 The first was not to go with the thinner counter top which we had chosen in an effort to save money. He said that it would make the stove stick up at least an inch above the counter top and because of the edge we had chosen, the counter would look thin. Because I like how our kitchen looks now with a thicker counter top, I opted to go ahead and get the thicker ones. That of course increased our price.

The drop down sink and windowsill

He also suggested that we drop the sink down just for aesthetics. (We had purchased the sink during our last “remodel” and weren’t planning to replace it.) And he said we could line the windowsill with the quartz too. You probably already guess it – these add to our cost. But I agreed to do them because if you are going to only plan one purchase of counter tops, you might as well make it something you want and will be happy with. It is after all a big expense.

The buffet area in the dinette

My husband approved of all the additional expenses, and then it was off to wait for the counters to be cut. And we have a lot of them. In all, we ordered nearly 100 square feet of material for the kitchen counters, back splash (4” above the counters) and dinette buffet area.

They installed my beautiful counter tops at the end of August. It took them four hours to tear out the old and install the new. I love how they look and am glad we opted for the dropped sink and windowsill additions.

Our next step is to change the lights. We are thinking of going with recessed lights but haven’t begun pricing that step or looking for someone who can do it for us. After that we will be painting the walls of both the kitchen and dinette area. Who am I kidding? It will be me doing the painting. After I did both kids’ rooms last summer, I feel I can take on the kitchen too. And with that, our kitchen will be done…until I decide the floor tile needs updating.

Last March, we remodeled our kitchen by putting in a new sink and painted our counter tops for under $600. About 9 months later, I noticed a few spots here and there where the paint had worn off and exposed the original off-white kitchen counters. 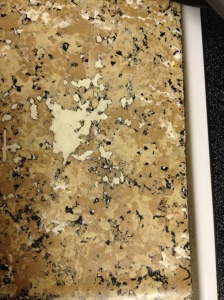 Area by the stove

At first, there were just a few spots next to the stove (a high-use area) and by the sink (an area that is often wet). It was these two areas that I decided needed to be redone after the spots near the stove began to grow each time we wiped the counter.

I did the area by the stove first. As I applied the black primer from the Giani granite paint kit to the exposed areas, I noticed more and more little worn marks. I didn’t want to repaint the whole counter (even though it is a small section) so I just dabbed on some back primer on the exposed areas.

It took me a little while to remember exactly how I sponged on the other colors. I know the first color wasn’t done precisely the same as before, but I am hoping now that I have added the others and layered on the colors that it will look okay. Actually, I am sure it will be unnoticeable to anyone else, but I may always see any flaw. I noticed this was true last time.

I was extra careful about putting on the clear coat and made sure there was plenty of coverage. They recommend two coats, but I went ahead and added a third.

The sink area before repairs

I did the sink a few days later. You can’t use the counter while painting, and the clear coat needs to set for a minimum of 24 hours before use, so I didn’t want to have two sections of the counter out of commission at the same time. 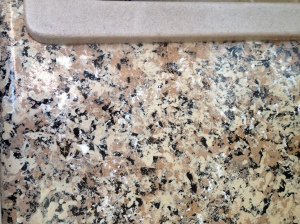 After shot of section by sink

By the time I did this second section, I felt like a pro. It was easy to blend the new areas in with the old. I don’t think in either area, you can tell that I “fixed” the counter at all.

While I am disappointed that we didn’t make it through a whole year (or much longer) before having to fix the counters, I must say I do enjoy how they turned out. I don’t know if the problems that developed are due to the product or to “user-error”. I did have a lot of counter tops to cover the first time, and the clear coat was the hardest thing to do. There is certainly a possibility that I didn’t apply it well enough. And of course since I am not using their brand cleaner, I guess my cleaner could have worn away the clear coat.

Would I still recommend this paint for your counters? Yes, I do. It was an inexpensive fix to spruce up our kitchen, and the repairs to the paint were easy.