Please welcome author Adam Thielen to my blog. His debut novel, Visceral, came out in July. You can find it on Amazon. It is on Kindle Countdown as of today.

I actually started writing before I was a teenager.  My first original story put to paper (well digital paper), was written as a Sophomore in high school.  I continued writing short stories through college, but then gave that up to attempt a novel.  It took several tries and over a decade of projects before finishing Visceral.  I don’t really consider myself a writer.  Maybe once I’m successful.

I don’t think I could write without doing some form of planning.  I at least have to write out a list of significant developments.  For Visceral, I wrote a list of events, even a few blurbs to remind myself what I was doing.  For my next project, I will be doing a more formal outline.  It’s no good getting halfway into a book and being unsure where to go next.  That being said, I wasn’t able to stick entirely to my list.  It had to evolve as I wrote what the characters would actually do in the situations presented.

Visceral is a straightforward story with a large mix of supernatural and cyberpunk elements.  Most of the focus is on dialogue and action rather than narration or description.  There are four protagonists, each with a kind of specialty.  Circumstances bring them together, and what starts as a somewhat simple job turns into a fight against multiple adversaries.

I’m a big fan of cyberpunk, especially in the gaming world.  I also wanted to contribute to vampire fiction something closer to the comic book and movie character “Blade” to counter all the “Edwards”.  Those familiar with role-playing video and tabletop games will see a lot of familiar themes.

Visceral is how I want the scenes to be conveyed to the reader.  Some are violent, some a bit gory.

I had to do a little information technology research, but that’s been my day job for a long time.  What I really needed to research was the Old West.  I made several errors in my initial draft with how I treated the region depicted around the year 1900.  You get used to a lot of cliches from Westerns, and if you look into the actual history, you find that much of the United States did not fit those molds.

No.  However, most character traits, expressions, and voice were pieced together from experiences with others.

Which of your characters is your favorite? Do you dislike any of them?

Tamra.  She’s black, she’s a woman, and she’s a badass.  But not like a Chuck Norris badass.  She doesn’t shoot the wings off of a fly, or flip kick anyone (sorry), but she’s confident, competent, smart, and willing to do what is needed.

Confession: I had to Google ‘black moment writing’.  As soon as I read it, I knew what it meant.  It’s sort of a cliché in movies and TV, and I try to avoid using it.   There are times of peril though.  Early in the story, one of the characters calls it quits and it seems like the band is breaking up.

I’m working on a prequel novella that will feature two of the vampires twenty years prior to the events in Visceral.  It’s going to be more exposition and brooding noir, and a little less action and blood.  I hope after that to write a sequel to Visceral taking place twenty years after it that will be written in a similar style as the world continues to evolve.

There are scenes where Taq, a powerful mage, enters the Ethereal plane, a place that is much different than the physical world, and it was difficult to describe it in a way that was effective and clear.

Taq is the mage, and I’m always the mage. I want magical or super powers.  It’s the type of character I always choose when playing a game, and most of my stories feature a magic user of some type.

Foundation’s world created by Isaac Asimov.  Space travel, robots, mental powers, what is not to love?

When the vampire council sends its enforcer Matthias to investigate a suspicious young nightstalker, he discovers that her attempts to turn a human mage have resulted in a deadly fiend.

With time working against him, Matthias seeks help from a talented but reckless young mage and a mysterious neuro with her own agenda. But the more they discover about the fiend, the more they threaten to unearth secrets that the powerful will kill to keep buried.

Enter a world transformed by a great economic collapse into a corporatocracy governed by executives, their boards, and appointed councils. A world where man has learned to exploit the ethereal plane to subjugate the laws of nature. Where vampires have emerged to carve a place within civilization. A world ripe for the taking by those with the right resources.

Visceral is a dark and gritty delve into a cyberpunk world that does not give you a chance to catch your breath. Filled with action, dark satire, and occasional humor, Visceral is a fast-paced urban fantasy taking place in the near future, present day, and even the old west. With a climax both satisfying and appalling, this urban fantasy jaunt will sate your lust for blood. 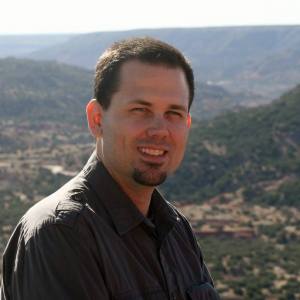 Adam Thielen was born and raised in a dusty Kansas town. He started writing at an early age, and would finish his first novel two decades later.  His writing is inspired by movies, television, tabletop games, and video games. He holds a degree in Philosophy and earns a living in the IT field.

You can purchase Visceral on Amazon.