Today is Friday, and while I usually host a guest author, I didn’t have one lined up for today. (Any authors who want to be featured, check out this post from last week.) About 5 months ago, my latest fantasy novel was released. If you haven’t bought your copy of Blood Bond yet, check out this excerpt and then pick up your copy on Amazon.

As Soren walked, he noticed a brown dragon sitting apart from the others. The last time he had seen Barth was when the dragon had thrown him off his back before Blinking. Remembering that horrible feeling of falling, he clinched his fist and stalked over to the brown dragon. Barth regarded him coolly as he approached.

“You were making a mistake,” Barth said, calmly.

Soren paced in front of him, waving his hands as he spoke. “You couldn’t have told me that and then landed? Instead, you threw me off your back while we were in the air! I could have been killed!”

Soren took a deep breath and another. “What if Dex didn’t save me?”

“Then neither of you would have had to worry about the Blood Bond,” Barth said with amusement in his voice. His eyes focused on Soren and when he continued, he tone was serious. “You and Reddex share a Bond that is stronger than any I have seen. I knew he would save you, just as I knew you were acting out of anger. It would have been a mistake for you to leave. Do you regret choosing to stay with him?”

“Well, there you are. Perhaps you should be thanking me instead of being angry.”

Soren threw his hands up in the air and stalked away. Now he was more annoyed than he had been after dealing with the General. He didn’t want to return to Camden. He needed to work out his frustrations. He spied a rake leaning against a nearby building. Grabbing it, he returned to the place where Dex had originally landed. Though the dragon never complained about sleeping on the rough ground, Soren began clearing the area of rocks. Dex would probably point out he had been sleeping on them for the past week without a problem, but he needed something to do and removing the rocks and sticks, so they didn’t jab the dragon as he slept seemed the perfect distraction. As he worked, he considered erecting a tent nearby but dismissed the idea. He knew he too would probably be sleeping on the ground. He had become accustomed to sleeping against Dex. He found he slept better that way.

As he continued to clear the area, sweat dripped down his face. The manual labor felt good. What felt even better was to be out of the city. There was no chance he would be bombarded with questions out here or that anyone would doubt his observations. His thoughts went back to his report on the advancing army. He knew what he had seen. The cloaked figure was a woman.

“What are you doing here?”

Soren froze at the sound of a voice he hadn’t heard in years. His hands gripped the rake handle until his knuckles were white. He turned slowly. The man stood with a saddle thrown over one shoulder. His hair and beard were streaked with grey. A brown leather apron covered his clothes. The look of disgust on the man’s face was one he had seen thousands of times.

His father dropped the saddle to the ground and took a step toward him. “I might expect to see Jerrick here but not you.”

His father could always tell them apart. He didn’t move as his father approached. He saw his father’s eyes travel down his face to the mark on his neck.

Soren didn’t see the fist coming. It slammed into his jaw. Pain exploded across his face. He fell to the ground. He lay on his back, slowly bringing his hand to his mouth. He wiped away the blood. Anger coursed through him, and distantly he heard Dex calling to him.

“You don’t speak to me like that.” His father placed his foot on Soren’s shoulder, pressing down until he had him pinned to the ground. He leaned over him, applying a little pressure. “The mark?”

Soren grunted as his father increased the pressure. “It’s so they can tell Jerrick and I apart.”

“Ah. I see.” His father glanced up, his eyes widening.

Soren heard the wings. The ground shook as Dex landed. His father took a step back, releasing the pressure on Soren’s shoulder. He backed away as the red dragon advanced. Soren climbed to his feet, placing his hand on Dex’s flank. His father’s eyes flickered to him.

“You don’t belong here,” his father said. “Nothing good will come of this. And soon you will be the cause of another death, and they’ll know it.” 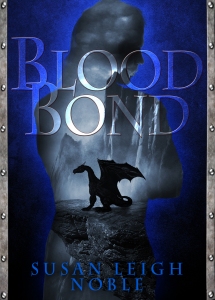 Man severed the alliance with the dragons fifty years ago. But now an invading army marches north destroying everything in its path. The dragons believe only together can the invaders be defeated. They need an emissary.

Womanizer. Drunk. Failure. Soren is many things. A leader isn’t one of them. But, Dex, the dragon who saves him from a cliff, believes different. Thrust into an adventure he never wanted, Soren’s life changes forever when during a battle Dex’s dragon blood mixes with his blood creating a mystical blood bond – forever linking them.

As the bond strengthens, Soren must decide whether to return to his old life or accept the bond and embrace his role in the battle against the invading army.

You can read the first chapter here or another exciting excerpt here. Or stop reading snippets and get the whole book here on Amazon.