Two Christmases ago, Lexie asked for a guitar. Every once and a while, she would pull it out and strum the strings, but she never learned to play it. Then earlier this year, she became determined to take guitar lessons.

You know with kids you can never be sure how dedicated they are. They get an idea in their head and are gung-ho about it in the moment but once lessons and practice start, their enthusiasm wanes.

About this time, our school district sent out a list of classes for adults and students. They were offering a 6-week beginners guitar class for kids 6 to 17.  The description said by the end of the course, the students would be able to play a song. Lexie was all for taking this class so I signed her up.

The guitar Lexie had received for Christmas was purple with pink hearts. It was a half-size guitar which is good for kids up to about 8. Classes started a few weeks before Lexie turned 10. While she was excited to take her guitar to the first class, afterwards she declared the guitar was too small for her.

Measuring it, the guitar was a little small for her, but I wasn’t convinced she needed a new one. She practiced for a week and then back to class. Afterwards, it was the same complaint. She thought her guitar was too small. I also think she didn’t like that it looked different from the other kids’ guitars. But a new guitar is quite an investment for a good one. And with two lessons under her belt and only four more classes to go, we weren’t sure we should make this sort of investment when we didn’t know if she would want to continue lessons. 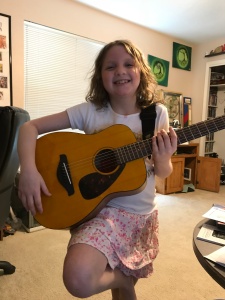 After a weekend of debating it, we decided to get her a new guitar. The new one was a Yamaha ¾ guitar that the salesperson at music store said was popular for beginners. Lexie was excited about the new guitar and happily went to the next class.

But it was about this time that Lexie declared that the class was getting harder. They were working on playing “Centuries” by Fall Out Boy. Ah, it was just as I feared. Just as the class got harder, and we required her to practice, Lexie was becoming less enthusiastic about the new guitar.

But being a kid, this attitude could change at any time. Just last week she was talking about playing the guitar in the school talent show and now she is thinking of waiting until she is older to continue lessons. Sigh. There is just no telling what she will end up doing but until then, she has just two more lessons left. At least at the end of it, she will be able to play one song on her new guitar.