Please welcome author Rosie Christie to my blog. Her book, As Tears Go By, was released last year. She is currently working on a sequel to it.

As Tears Go By – Inspired by True Events – An eye-opener to treatment of Indigenous Children lost in the system.

The emotions portrayed by Maria, a beautiful Cree woman raised in residential school, attempting to save her children from the same demise as herself, tears at your heart strings while Kate, the overbearing foster mother rules with an iron fist, a wicked mouth and a razor strop. This book is compelling which makes it a very hard book to put down. Follow the journey as the fate of Maria’s children, Dolly, Jacob and Rayen, hang in the balance.

What inspired you to write this book/series?

This story is something I have had extreme difficulty with for over a half century which is when it all began. It is only by the grace of God that I am still here on this earth. This is why I felt it was a testimony that needed to be heard. This story even to myself seemed so unbelievable that it needed to be shared.

How did I come up with the title?

“As The Years Go By” was what I was typing with lightning speed when the title “As Tears Go By” emerged. It proved appropriate to the content and it stuck with me.

“Rayen – More Than Enough” is the second book of what I now call the Rayen Series.

Rayen leaves the house where she has been abused for the past 12 years.  At the tender age of thirteen she discovers the name she is using is not her own. Nothing she has been told is real. She hates herself. The streets can be cruel for a naïve preprogrammed little girl. Pedophiles and violent men swarm to her in droves. Would death be kinder?

“As Tears Go By” and “Rayen – More Than Enough” have both invoked so many emotions that each page has been difficult to write. These stories need to be told. It is my hope that other people can find inspiration in these survival stories and that in some way I can help them.

I changed their names. I shaped their minds. I was judge, jury, and executioner. No one could stop me. No one! To anyone looking in, we were just a normal church going, family. No one was aware of the dark secrets we held within the walls of the tiny house by the swamp. I was the woman with the razor strop and I made sure every blow connected. That was until the day the sheriff handed me my subpoena. I felt the hair stand up on the back of my neck. Abuse? What? The one-word ringing in my head drowning out anything and everything else that might have been said. I felt I might just pass out right there on the step. I kept my composure until he pulled out of the driveway and then my anger quickly exploded into rage. Those ungrateful little bastards. After everything, I did for them. This was my thanks. A bolt of straight adrenaline shot through my veins and I grabbed the gun….. I had instilled the fear of god in them. I am not a woman to be tampered with. How could this be happening? My one mistake…and I don’t make many… was not realizing that these stupid children would grow up. 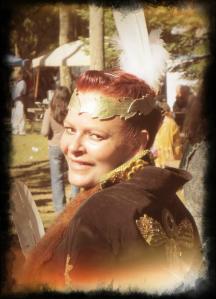 My name is Rosie Christie and I am from the Thunderchild First Nation in Saskatchewan. I am a Canadian Author. My inspiration came from author V.C Andrews. “Flowers in the Attic” was a major influence in my life when I realized that I was not alone in my plight. This author gave me the strength to continue on and to eventually escape from the nightmare that I lived.

In reform school I was taught to write down my thoughts and feelings that were too indescribable to speak about. We would burn these writings on the fire. I continued to use this mechanism as a release for many years and I did not elect to publish any writing until 2016.

My writing is slated as Fiction but only for legality purpose. I feel it is anyone’s inherent right to write or speak about their own history without repercussion but this is not so when abuse is involved.

You can find out more about Rosie and read the first chapter on All Author.

You can purchase As Tears Go By on Amazon.