For the A to Z Challenge, I have chosen the theme of antagonists.

On my normal blogging days, Monday – parenting and Thursday – writing/publishing, I will tie that day’s topic to antagonists but on the other days (Tuesday, Friday and Saturday), I will write about antagonists from movies, TVs or books. On Wednesdays, my Quote of the Week will be from an antagonist that matches the letter of the day. Enjoy. 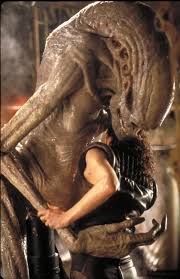 While in the first film, these creatures were just called an alien or an organism, it is in the second that Lieutenant Gorman refers to them as Xenomorph.

These aliens are unique antagonists because they are dangerous in several different forms. The Queen Aliens lay eggs. And from these eggs come the first antagonists known as “facehuggers.” These creatures attach to the face of a living host. From there they insert into the host an embryo known as a “chestbuster.” After a period of gestation, these creatures erupt violently from the host’s chest, resulting in the death of the host. The “chestbuster” than matures into an adult form. These adult aliens are the drones or workers for the Queen.

This species has one goal – the propagation of its species. In order to do that they need hosts and will destroy any lifeform that poses a threat to them. That whole chest busting moment definitely makes these aliens a scary antagonist.

A is for Apocalypse

B is for Bad Boys (parenting)

C is for Cruella de Vil

D is for Darth Vader (Quote)

D is for To Die for Cake (Recipe)

E is for Evil (Writing)

F is for Freddy Kruger

G is for Gollum

H is for High School (parenting)

I is for Iron Monger

J is for Jafar (Quote)

K is for Killers (Writing)

L is for Loki

M is for Maleficent

N is for No (parenting)

O is for Oggie Boogie

P is for Professor Moriarty (Quote)

Q is for Questions (Writing)

R is for the Riddler

S is for Sauron

T is for Technology (parenting)

U is for Ursula

V is for Voldemort (Quote)

W is for Witches (writing)