Please welcome author Grant Kniefel to my blog. His short story, The Soundtrack of Life, was released in September. You can find it on Amazon.

Hi, my name is Grant Kniefel. I am 18 years old and was born in Anchorage Alaska.

I started writing in 2nd grade. I would hang out with my dad when he coached wrestling at the high school he worked at, so I would write a lot. When I was in 9th grade, I wrote my first real short story called She Married Kevin. I Am Fine Now. I think that was the point where I really started considering writing as the thing I want to do with my life.

My next project actually isn’t a book. I am currently trying my hand at stage directing and script writing. I am currently tied to an original project entitled Rylan and Bec which deals with a teenage romance in the confines of a treatment center. I am also directing the film adaption of my short story The Soundtrack to Life.

I am currently attending high school actually. I write during the free periods I have. I tend to sit down for at least 45 minutes a day and do something with the piece whether it’s editing or writing new content.

My most recent and current release is called The Soundtrack to Life. It deals with the journey of a young musician who releases that his own narcissism is ripping apart every relationship he has. In doing so, he finds solace and therapy in writing music and begins to truly love himself and creates his magnum opus, his “soundtrack to life”.

Yes. The main character, Jeremy Cabb, is actually based on my own personal journey through the landscape of arrogance and narcissism. The female lead, Ramona, is based on a dear friend I once had and how I ruined that relationship. Their conversation that opens the story was similar to that of which we shared together.

This is my favorite story out of writing it. So I was on my way to church with my grandmother. I told her that I was writing a new short story and that it wouldn’t be overly inappropriate. (My last two were so much so that she read through the first few pages and stopped). So I was originally going to call it “This is Not for Stupid People”. She said it didn’t really fit with the story so I shouted out some ideas. At one point I said, “Jeremy Cabb and the Soundtrack to Life.” She said “How about just the Soundtrack to Life?” and it has stuck ever since.

I think that the hardest was the ending. In retrospect, I honestly hate it. I find the whole chapter to be hokey and fake. However, in that I find that the epilogue is much better at representing what I wanted to write.

I think that the best person to be would be Jessica Riley from my short story She Married Kevin. I Am Fine Now. This is due to the fact that she is a nymphomaniac who torments the hero, Blink. The whole story is dedicated to how much she screwed him over and so I think it would be interested to see what it would be like to be in her head as she is not too unlike Amy Dunn in Gone Girl.

I go through books like they’re pizza. It is always so hard to come up with simply one all time favorite. Currently it’s a small list which includes The Fault in Our Stars by John Green, The Great Gatsby by F. Scott Fitzgerald, It’s Kind of a Funny Story by Ned Vizzini, Gone Girl by Gillian Flynn, and Me and Earl and the Dying Girl by Jesse Andrews. Which leads me to…

Firstly, F. Scott Fitzgerald. I love his work as a whole. He is who I consider to be my favorite author. He is a master of description and his pieces make me want to go back in time and live in the Jazz Era. The other one would be J. D. Salinger. This is because, while not included, The Catcher in the Rye has had a complete and utterly life changing effect on me. I want to thank him for giving his piece to the world.

In my opinion, the best part of the writing process is listening to music. I never write without music. My current favorites are Coldplay, Mumford and Sons, Kanye West, Childish Gambino, Neutral Milk Hotel, Two Door Cinema Club, Phoenix, and the soundtrack to the film La La Land. These are all so incredible and so diverse that they create a whole universe when combined together. 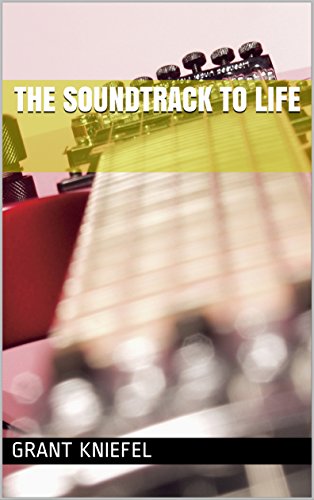 Jeremy Cabb is making it somewhere. But when his own ego threatens to rip everything to shreds, he finds himself looking inside to find the answers he needs and to help create his best album ever.

Grant Kniefel is an 18 year old who lives in Alaska. He has written and published short stories, articles, and reviews, and currently attends to his blog entitled “Movies That Aren’t That Bad”. He tends to find himself writing more and more and likes to push boundaries to create raw and emotional pieces. You can find him on instagram(@suburban_yeezus), where he is much cooler than he is in real life.

You can purchase The Soundtrack to Life on Amazon.