Two years ago we took a trip to Disney World. Anyone who has stayed on Disney property knows that it is not cheap. So for the following summer we decided that we would just go on a vacation closer to home. We decided to go to Houston (about 3 hours from here).

But that plan changed when my parents decided to take my brother and my family on a Caribbean cruise to celebrate my Dad’s 80th birthday and my husband and my 20th wedding anniversary. So we pushed the Houston plans to the summer of 2016.

That was the plan when I wrote in January about our summer plans. We were going to save money and go on a vacation closer to home so that we could re-do the counter tops in our kitchen. Then we got a much larger than expected tax refund. And my husband mentioned going to Disney in December rather than waiting until June 2017 as was our original plan.

Christmas Tree outside of the Animal Kingdom Theme Park. (2009)

Now, before the kids were in elementary school, we had taken them to Disney World a couple of times in December. The weather is great and the theme parks and hotels are all decorated for Christmas. But if you recall a post I wrote back in January, I try not to have my kids miss too much school. Typically they have only missed a day if they are sick.

OK…I admit to taking them out early for the rodeo and once for a beach trip. Every June Disney trip has had them missing the last day of school. I always thought I would feel too guilty to take them out of school for a whole week for a vacation.

I stewed over my husband’s suggestion for a week or so. I began looking at prices of hotels to see if it was any cheaper to go in December verses waiting until June. (Nope, not really much of a price difference.) I even talked to a few parents I know who have taken their kids out of school for a family vacation whether it was Disney World or a cruise. None of them regretted it. One, who now is a teacher at my school, highly encouraged me to do it.

“You won’t regret it,” she said. “Think of the memories you will make.”

Our principal is very family oriented. My kids are good students. If the teachers give make up work, we will do it. If they get zeroes on work for the days they miss, it won’t affect their grades that much. And honestly, who really cares what your grades were in third and fifth grade anyway.

So I decided we would do it. We would take them out for five days in December.

Now each time we have gone to Disney, we have stayed at the Caribbean Beach Resort. My husband and I spent our honeymoon there and an anniversary trip before taking the kids to that resort. But when I looked, there was no openings for the time we wanted to go. (9 months in advance and no standard rooms? Weird but it is the same time as a youth sports groups annual competition and they may be holding rooms for them.) 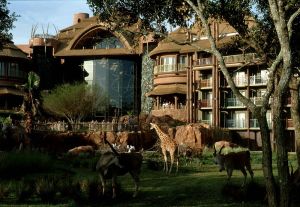 I have always wanted to stay at the Animal Kingdom Lodge. But this is a deluxe resort and $$$$$. I was thinking if I could get it on a discount and it was only a little more than our normal resort then I would go ahead and do it. Pricing it out with the discount I assumed might be offered and it was still out of our range for what I am willing to spend on a resort.

Then I read about renting Disney Vacation Club points from a DVC member. This would make the Villas at Animal Kingdom Lodge affordable for us. After looking at room options and dates, we booked a Studio with a view of the Savannah for the week after Thanksgiving. I am so excited! I cannot wait to check out this resort!

One thought on “Our vacation plans changed yet again”