I always tell my kids that their job is school. It is their job to learn and do their best at the lessons taught. Because I believe school is important, we try not to have them miss school.

I am a firm believer that if they aren’t really sick, then they need to be at school. If they aren’t running a fever (over 100) or throwing up, they are going to school. The one time I relented to this rule, I regretted it.

Of course, there are also doctor or dentist appointments to consider. We try to make those after school but that isn’t always possible, so I try to make them later in the school day, so they don’t miss too much. (School may start at 7:30 am but they have to be in class at 9:30 am to be counted for the day. Even if they come in later than that, they are still marked as absent.)

I know quite a few parents who have no qualms about taking their kids out of school for any reason – vacation, mental health day or whatever. Yes, places like Disney World are less busy during the school year, but I would feel too guilty taking my kids out for a week. There is no amount of makeup work that can replace actually being there.

Jase and Lexie on the tall slide at the rodeo.

Now, I must admit that I have taken the kids out for some not medical reasons. The last time was just two and a half weeks ago. Every year, San Antonio has a Stock Show & Rodeo in February.  This is a two-week event featuring not just a rodeo and agricultural exhibits but major singers nightly and a carnival.

We don’t typically go to the rodeo though it is very popular (read crowded). I took the kids when Jase was 6 and Lexie was 3 for what they call Dollar Days. Admission, all carnival rides and some foods only cost $1 on these days. Two years later, I took them again and then again this year.

The best way to beat those crowds on these discount days is to go early so I have taken the kids out of school around 11 am (or during the first year just waited until Jase was out of his pre-K class). 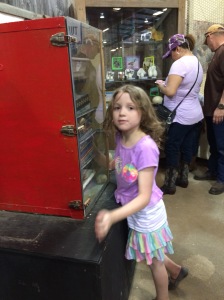 It isn’t all riding rides. We do some of the other kid activities and check out the petting zoo. I hope that some of it is at least educational for them. It at least lets them see another side of life if nothing else.

This is only one afternoon every other year, so I don’t feel too bad about taking them out. Last year, they also missed a day in the spring. My husband had a conference at South Padre Island, so we went up the weekend before. Since it is a 5-hour drive, we decided the kids and I would just drive back on Monday. But I knew the kids didn’t have any tests or major activities happening that day, so I felt fine with our decision.

And Jase missed the last day of school the first three years of elementary school. But then again, all the teaching is over by then, and we were going on vacation, so I didn’t feel bad at all about this.

As the kids advance in school, I actually expect it to be harder to feel okay with taking them out of school for a day here or there. Yes, there are some things like doctor’s appointments but most of their time is best spent in school learning.