Author Toni Owen Blue just released her children’s book, Tick Tock, last month. This fantasy coming of age story is suitable for those age 10 on up.

I think the first time I really considered myself a professional instead of an enthusiastic amateur was when I got my first fan review by email about my first work Double/Cross. Even though I’d been earning money from it and it did very well with shopfront reviews and scores.

I think I just felt rather detached from it, like all those people might have, I don’t know, left reviews on completely the wrong product or something equally ridiculous. Don’t get me wrong, I really appreciate every single person who took the time to express their feelings on shopfront reviews. But there was something incredibly personal about receiving an email about how they felt.

How much of yourself, your personality and experiences are in your books?

I’m lucky enough (or unlucky depending on your perspective) to have had enough happen to me that’s really worth writing about, so quite a few of my own experiences are in my books, so much so that ‘Iris’ which is currently in editing is actually pretty autobiographical.

It really does depend on what I’m writing which parts of me you can see though. For example in Double/Cross I break the fourth wall once in a while and get sarcastic about what’s going on, which I could (and very much enjoyed) doing, as it was a very fun project. The protagonist of Tick-Tock, Vega, shares a few experiences with me, being bullied in school and having trouble with her mother. There’s a bit of me in all my projects really, just different bits.

Have you started your next project? If so can you share a little?

This is a very well timed question as I’ve finished my most recent project just this week, Iris, which I’ve already mentioned is now in editing. It’s a middle grade realistic fiction book that follows young Iris as she struggles with growing up with one abusive and one absent parent.

While that’s going through editing I’m geared up and planning the next project, another interactive fiction like Double/Cross, which I won’t spoil yet, although I will say to keep an eye out for it as I’ll probably be looking for Alpha testers towards the end of this year.

I’m going to start with the worst thing about being the writer, because I’ve always liked to finish on high notes, and that is the way people look at writing, it’s one of those things that most people think they could do if they took the time, it’s not really viewed as a job. I think most authors will be familiar with the answer, when you tell people what you do ‘Ah – me too!” only to be told about an avalanche of ideas that have yet to be put on paper. In my mind this is like me claiming to be a doctor because I read ‘A guide to Anatomy’ one time.

As for the best, I imagine it’s the same for many writers, I’m doing what I love, I’ve always wanted to write, and despite the very painful experience of having my rose tinted glasses ripped off my nose when I realized that writers can’t just bury themselves underneath a big pile of books and coffee, I still can’t think of anything in the world I would rather be doing.

Please tell us about your current release

Tick-Tock is a middle-grade fantasy adventure for anyone 10+. It follows Vega, a twelve year old girl who’s living in the scarce village of Coalridge after her families’ exile from the much richer Sunlands. Her Mum devotes her life to the idea of going back to their old home, and Vega can’t find a single friend, aside from her brother.

Vega starts our story as well meaning, but a little spoiled. Hating the situation she’s in, but at the same time not doing anything about it, her brother is the one to bring good fortune her way. But when this blows up in her face and Vega finds herself alone for the first time and has to grow up much faster than she’d like.

I think everyone struggles with confidence time to time, especially at a younger age when dealing with self-identification is very new.

I think this is something everyone goes through in their adolescence and then usually again later, namely finding how you can make yourself proud of what you do. That’s something that’s different for everyone and usually it’s something that you do. I’ll use myself as an example, when I was younger I did a lot of Kickboxing, and being good at that was how I got a lot of my self-worth. Looking back on it I don’t think that’s the best way to get your self-worth, because you end up defining yourself through it and that’s not who you are that’s just what you do. I wanted to take Vega and explore taking pride in yourself for who you are, if that’s clear.

I think that’s something that should always be on people’s minds when they think about themselves, even though a lot of the time it isn’t (I’ll be the first one to hold my hand up and say I’m very bad at doing that).

Titles are difficult for me, and I really wish I could employ someone to be a Title Creator or something because I’ve not improved in the slightest since my first work.

All the Tick-Tock files are saved in my computer as Clockwork. I knew from the start I couldn’t keep that title because I read Philip Pullman’s book by the same name a lot when I was younger and I can’t get it out of my head. Eventually I had to sit and actually come up with a title I could use and thinking about it I realized Tick-Tock was perfect. Mechanical clockwork is something that hangs over Vega like a storm cloud throughout the book, the industry of metal work being the reason for her family’s exile and poor situation, and ultimately it becomes the reason she loses a family member.

Time is also a big factor for Vega, she starts the book with time ticking down till the moment she’ll have to accept her fate and go work in the mines. Later on in the book she finds herself losing time completely and things get very muddled and confusing.

Combining the two ideas turned out to be perfect.

Did you base any of the characters on real people?

My brother was absolutely thrilled to hear that Vega, with her traumatic character arc from slightly spoiled to kind-hearted and considerate was in fact loosely based on him when he was around twelve.

Which character is your favourite? Do you dislike any of them?

I love most of the characters for one reason or another. I love how tenacious Vega is, Rigel’s dependability and good humour. Stia is one of my absolute favourites with her fierce loyalty and Lyra’s confident gut busting made some of my favourite moments.

You’ll note I say most characters, there is one I absolutely despise and that’s Na’ir, he is just everything that makes me angry. I half wish he was real because then I’d be able to go full zombie apocalypse on him with a bat. 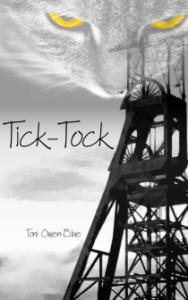 “She saw his body was not a body at all. A bronze plate ran from his collar bone over his chest, stopping where his stomach would have been and giving way to ticking silver cogs, groaning mercilessly as they pumped what looked like clotted black oil.”

Coalridge. The name says it all. It’s a barren wasteland running down the ridge to the little town where the people spend most of their lives deep underground, mining rocks as hard as their heads. Coalridge is where Vega is stuck, even though she’s so different. Exiled with her family from a home she was too young to remember Vega belongs neither here nor there. The one place she knows she doesn’t belong is crawling around in the mines.

The only person who understands is Rigel, her brother. But when the pact that was meant to help their escape goes horribly wrong Vega ends up truly alone for the first time. It’s strange how easy running away is when you have nothing to lose.

Toni Owen-Blue is a passionate writer of Interactive and Children’s Fiction, with a background in script writing and thrilling chair catalogue articles. She lives with Caspian, her dog, in Sunny England.

Toni’s inspired to write books for children in difficult situations in the hope that one day her books might inspire children the same way she was when she was young and living through a lot of the difficulties that people know exist in the backs of their heads, but don’t like to discuss very much.

With a million project possibilities before her Toni can’t get enough of creating both.

You can find more about Toni on her webpage. And you can purchase Tick Tock on Amazon and Amazon UK.