The sand, the waves, the cheery people…it was all good. Yes, we finally went on that Caribbean cruise that I have been blogging about since March. And by all of us, I mean my family of four, my parents and my brother. We all had a good time.

Everything went pretty well except for one day, which I will get to in a moment, and of course the end when we came home to a 95 degree house (our air conditioner broke while we were away). 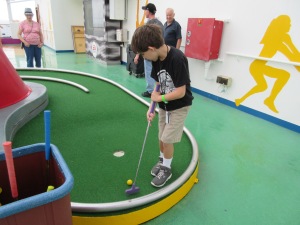 So let’s see…the cruise ship – The Carnival Magic – was excellent. I thought the pool seemed kind of small for that size ship (holds up to 6000 passengers and crew members), but it had a water park with two awesome slides, a 9-hole miniature golf course, a sky/rope course, a basketball court and at least six hot tubs.

The kids loved our room. We had a balcony and a connecting door to my parents’ room. Lexie enjoyed sleeping on the top bunk. And I never heard any whining about “getting dressed” for dinner. (No shorts or flip flops allowed in the dining room.) There were a few complaints about having their picture taken on the Elegant nights, but that was easily solved by bribing them with a trip to the onboard candy store.

Of our three stops – I can’t say which was the best. Even Jase said he couldn’t decide and loved all of them. If you asked Lexie her favorite part of the cruise, she would probably say getting chocolate fro-yo from the 24-hour ice cream and frozen yogurt place on the ship. 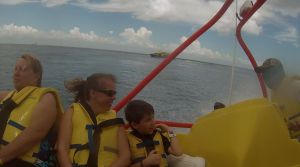 In Cozumel, we took the twister boat out to a private island. The twister boat does 360 degree turns, and you get a “Mexican shower” when the ocean spray hits you. The ride was wilder on the way back as we sat up front and were facing each other. 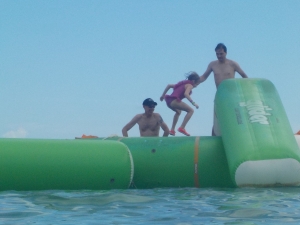 My parents joined us on the island but took the much slower catamaran. The food was good on the island, and the kids liked playing in the sand and ocean. There was a trampoline in the water. Lexie went out there with her dad and uncle, but Jase thought it was too far from the shore. 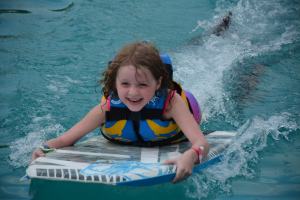 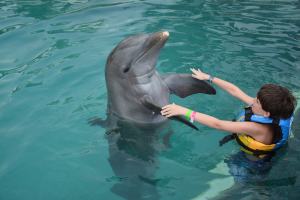 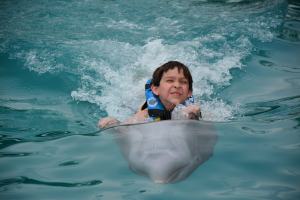 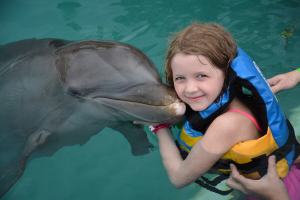 Our next stop was Grand Cayman. The ship was late getting in and due to some misinformation, instead of the 7 of us going on our dolphin excursion together, we got separated. My parents and brother made it to the 10 am trip but my husband, kids and I didn’t get off the ship until 10:40 and had to join the 11 am excursion. We went to the turtle farm briefly and then over to swim with the dolphins.

The kids did better than I thought they would. My husband helped Lexie, and I helped Jase. They got pushed on a boogie board and pulled across the water by a dolphin and then got to “dance” and kiss the dolphin though Jase opted out of the kissing. We got some really good (and expensive) pictures.

The next day, the kids and I went horseback riding in Jamaica with my parents. My husband and brother went zip lining and on a Jamaican bobsled. Their trip took all day while ours was only during the morning. This was my kids first time riding anything besides a pony. They did great. It was an hour-long ride through the Jamaican country-side, and we ended it with a brief ride/swim in the ocean. 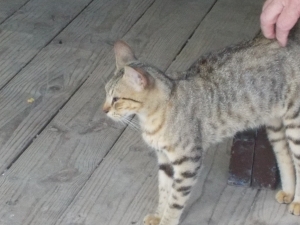 Of course, I think Jase’s favorite thing was seeing the kittens at the place.

Overall it was a great cruise minus that one hiccup in Grand Cayman (and coming home to no AC). Everyone had a great time, and the kids are already talking about doing it again.