Today author Mary A. Perez stops by my blog as part of her Running in Heels virtual book tour.

I am Puerto Rican descent, meaning both my maternal and paternal grandparents, as well as my father, were all born and raised in the Island of Puerto Rico, which by the way, I have yet to visit!

I was born in the Bronx and raised in Miami. In the year ’77 we moved to Texas. Although Houston has been my home for the past 38 years, I am far from having a Southern country accent. I am told that I sound like I am from up North. Go figure.

The best thing about being a writer is that writing can be therapeutic. It is when I am at my calmest and my thoughts go uninterrupted. I don’t feel pressured trying to convey my words plainly from the get-go. I can re-write for clarity at my leisure to get my point across. I think the worst part about writing is making the time to write and to remain focus without all of the distractions in today’s busy world.

My motivation for writing is the wonderful and positive feedback from the readers. Realizing that my stories have the impact enough to inspire someone makes everything I have experienced and written about worth it.

I didn’t know how to outline anything when I began writing. I just started jotting down thoughts and ideas as it came to me. After having written so much, I had to start naming the chapters in the book to know where I was and keep up. I knew enough about writing to know that a story should have a beginning, middle and an end.

Running in Heels: A Memoir of Grit and Grace is a coming-of-age journey of a Puerto Rican girl seeking love and security with her difficult mother in a dilapidated home. She becomes a teenage bride to a ruthless man twice her age and has her first child at seventeen and her fourth at twenty-two. Can she escape the shackles of poverty, alcoholism, racism, violence and abandonment to establish a happily ever after for her and her children?

I wanted my children to know some things about the hardships their momma endured. Because it is in the overcoming of those struggles that has made me the person I am today. They were accustomed to seeing me as some biotic woman, but that was far from reality. I had my share of pain and suffered losses my children didn’t fully understand until they read about it. Having said that, the book became larger than that when I realized others needed to hear that they may be inspired.

I found myself running in heels plenty of times, which only caused me to stumble along life’s journey. I couldn’t run fast enough in those heels, shoes I felt too big for me, even, in my adulthood, thereby making me feel like the small, insecure girl again. But in the midst of it all, I also discovered grit and the grace needed to get me through another day. I’m talking about God’s grace because His grace was sufficient for me and still is.

Which of your characters is your favorite? Do you dislike any of them?

My favorite characters would have to be my grandparents. They instilled old-fashioned principles of love, devotion and stability within the simplicity of a home. They may not have been perfect, but in my eyes they were flawless. As to the character I didn’t care for, naturally, I would have to say that was Natasha the home-wrecker.

The bleakest time period in my book would have to be the times of abandonment, both as a child and as a young adult. Then of course, writing about death and the sorrow of having to say goodbye to loved ones for good. And finally, the regrets of some of the choices that were made.

The most difficult scene to write was the chapter about the passing of my baby sister. That chapter was written and re-written through deep sobbing and blinded tears. There are several scenes throughout the book regarding abandonment. Each sequel was difficult to bring to life across the pages, even, the temporarily abandoned my own little girls.

I would like to meet and chat with Esmeralda Santiago, author of When I Was Puerto Rican. She also wrote a memoir of coming from an impoverished environment where parent-figures seek the American Dream, while constantly drinking and fighting along the way. Her story shares the loss of childhood innocence—even having to gaze upon a baby in a coffin—and children are expected to take on adult responsibilities.

I would like to meet and sit with bestselling author of twenty-three books, Jan Karon, author of The Mitford Series. She knows she is doing what God created her to do. At age 50 it was finally time to pursue her dream; she left her lucrative advertising career and began writing fiction. Her heartwarming character-driven work seeks to give readers a large, extended family they can call their own and serves to bring real-life situations in every series.

I tend to weep while watching a movie or a TV program of a newborn’s birth, as the mother bears down giving birth, and in hearing the newborn’s first cry. It doesn’t matter if the show is real or not; if I see or hear the miracle of birth, I cry. My husband thinks it’s sweet, but I can’t help it. 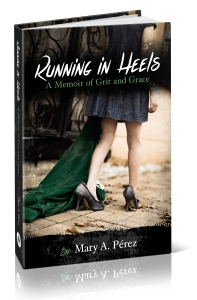 “More than a memoir—this book is a promise of hope for anyone who was abandoned as a child, to anyone who woke up hungry and went to bed hungrier every day, for every wife who has loved a husband who left bruises on her heart and on her body.”

Somewhere between stealing cold cuts from stray cats and watching a stranger leave her mother’s bed after breaking in through their bedroom window, Mary figured out that her family was dirt poor. Worse than her empty stomach, she was hungry for acceptance and love. She thought she found it when her baby sister was born and she became her “mommy”, taking care of her needs as best she could at the age of seven. Then she had to say goodbye over a small white casket.

Mary’s grandparents, first generation immigrants from Puerto Rico, took her in and gave her a glimpse of faith and stability. For a brief, shining spell, she had a real home—until they decided that Mama needed her. They may have been right, but Mama needed more than a little girl could give and Mary lost her way again.

Just out of Juvy Hall, Mary found a knight in shining armor to take her away. She became a teenage bride to a man twice her age—a man as deeply enslaved to booze as every “step-dad” she’d had as a child. She loved him anyway, even wearing the bruises he gave her, even when she tried to leave him to give their children a better life. Despite her fear and loneliness, she never imagined it would take a gunshot in the middle of the night to teach her courage. She was even more surprised when rediscovered faith paved the path to forgiveness after so many years of pain.

Running in Heels is a memoir of the grit and grace that carried a young girl through the shadows of her mother’s choices and on through an abusive marriage. Mary A. Pérez narrates an incredible story of survival in the face of hopelessness, and learning to forgive against all odds.

A story of coming of age, and coming into grace.

Mary A. Pérez was born in the Bronx, raised in Miami, and now resides in Texas with her husband of twenty years. Her award-winning essays have appeared in La Respuesta and Sofrito for Your Soul.

Running in Heels can be purchased from Amazon or Barnes and Noble.