Iris Bolling just released her latest book – The Book of Joshua II – Believe (A Gems & Gents Series) – in April. She took time out of her schedule to let us know a little more about herself and her books.

Not much to tell. I’m a fifty something year old woman who works a regular 9-5, then come home to work another 6-12 writing and love every minute of it. I’m blessed with a sweetie who supports and literally takes care of me. I mean, when I go into write mode, I dont’ stop to eat or do anything. He will cook, clean and fuss when I don’t take a break. Then he listens when things are not going the way I want. He encourages me to let things go and move on. I love that man. Anyway, I’m also a mother to 1 son, who works in politics, 2 nieces and 1 nephew who I raised. My last niece child is in college. So I now, semi have my house to myself. I love reading as much as I love writing. If I’m in write mode, the only thing that temps me to stop is a new book by Beverly Jenkins, Francis Ray, Julie Garwood or David Balducci. And Gwyneth Bolton, if she will ever stop playing and give us another Hightower story……hint….hint. I love music, family and friends. Not in that order, but you get the drift.

I grew up in Richmond, Virginia. Moved to Morristown, NJ during my Freshman year of high school. Then moved back to Virginia after college.  So I’m a Virginia/Jersey girl.

Honestly, not until I wrote Once You’ve Touched The Heart as a way to release stress from work. One of my friends read it and said you should do something with this. So I published it, and here I am. I am still amazed  people like to read these crazy stories that pop up in my head.

My life is not that interesting as my characters, believe me. LOL! Seriously, I think a little of my life is in every book I write. I do have my JD who test some of the love scenes with me, but other than that, not much.

The Book of Joshua II – Believe is my current release. The CIA Agent, known from The Heart Series and The Book of Joshua I – Trust, reemerges with a HUGE chip on his shoulder. Injured, he finds his life in the hands, of all things, a woman. The last position he ever wanted to be in. To make maters worse she is just as skilled as CIA Operative as he is. Together, they are task with discovering who is trying to take down the current President of the United States.

The character, Joshua, inspired me to write both books Trust and Believe. Joshua is such a hero to others, I thought it would be great to expose a few weak spots just to make him human. He still emerges as the hero, but this time he finds a sidekick for life.

For Trust and Believe, I used the internet, of course, FBI sites, CIA sites, and The White House sites. I was fortunate to have access to a few people for personal interviews.

No, not at all. I was surprised who the true antagonist was at the end of this espionage novel.

Rene Naverone, the ex-Secret Service agent from The Pendleton Rule, simply because she is fierce. The woman is beautiful, deadly, and very comfortable with who she is. Men are intimidated by her beauty and skill, yet, there is something about her that, entice them to want to know more. In addition to all of that, she has such a future ahead of her in my novels.

I have a really hard time approaching people. There are authors I admire, who I have a difficult time approaching. It’s not that I don’t want to, its’ I just don’t have the nerves. I love Beverly Jenkins, I mean, just love her. She is one of the most approachable people you will ever meet–ever! I have talked with her on several occasions, she has helped me in ways you would never imagine, but I still hesitate approaching her when we are at events or even on line. But, whenever I do, she is always there willing to share her knowledge. Gwyneth Bolton is the same way. She is always there when I reach out. The first time I saw Gwyneth was on a Romance Slam Jam cruise. She was at a table with several other authors, some I knew. Rochelle Alers was also there. I want to go over to that table and listen to whatever they had to say, but I just could not get my nerves together to make that move. On that cruise, with the flying trays and all,  Gwyneth won an award and so did I, we were on stage together. I so nervous, I grabbed her hand and held on for dear life. It meant the world to me, when she didn’t turn around and smack me. LOL! So, if you see me out and about, and I’m sitting somewhere by myself, it’s not because I don’t want to be bother, it’s because I’m still working on getting my nerves up to say hello. 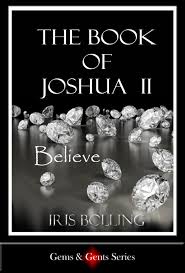 While in another country, CIA Operative Joshua Lassiter uncovers a plot targeting the current president of the United States. His loyalty to the country that betrayed him in the past comes to the forefront as he takes action to prevent the treasonous act. He is injured during the course of the mission and now must trust the new administration will rescue him. In-active CIA Operative known only as ROC is called back into duty by the White House. Her mission is two-fold. Bring Joshua Lassiter home, alive. Restore him to the number one weapon in the United States covert arsenal. The mission plunges the two into danger and uncertainty as the plot revels it is the United States military trying to prevent them from reaching the President, by any means necessary. Who do they TRUST? ——- Who do they BELIEVE?

You can purchase this book on Amazon and be sure to check out Iris’s other books.