Today I am pleased to have author Jas T. Ward on my site as he discusses writing his The Shadow-Keeper series.  Book One: Madness was released earlier this month.

Sure. I was raised in the deep south of Texas. I moved away for over a decade to Northern Kentucky and loved the region. I moved back to my home in Southeast Texas to take care of my aging ill father and help however I was needed.

I have been a writer since I was a child and it’s always been my salvation to deal with the hardships of life. Even now.

I can’t remember a time I didn’t write or draw. I used it as an escape of a painful childhood. I would write stories, poems almost constantly. Kept a notebook and pencil with me everywhere I went.

Tons. Maybe too much. All my characters have tortured pasts and love as well as happiness does not come easy to them. Much like what I put myself through for the same things.

What is the best and worst advice you ever received? (regarding writing or publishing)

Rules of writing style. How you are supposed to write this way, and only that way. That is terrible. Let it flow. Let the creativity show you where its taking you.

I’m never alone. Not when I can lose myself in my worlds and listen to my characters tell me their story.

The worst? I get a bit obsessed with it. Have a hard time focusing on anything other than the scene that is nagging me in my head to be written. I won’t be able to function until I note it down.

To keep my sanity. Without writing? I honestly don’t think I could function. I suffer from post-traumatic stress syndrome from a tragic incident as well as bi-polar tendencies after the abuse I suffered growing up. Writing is my outlet. It keeps me level. And for that… I owe it so much.

The right answer is outlining right? Oops. I have outlined books yes. Have I stuck to it? No. I just start going and it flows and I’m just along for the ride at that point.

Madness is the first book in the Shadow-Keepers Series. It’s a fun, dramatic, twisted and dark read but with enough light to make it never seem too heavy. It’s the story of Reno Sundown who used to be the split personality of a hero. Until they both fell in love with the same woman. Then they became enemies and Reno wanted them both dead rather than have his good-side be with her. A god called Bounce stepped in and separated them to give Reno his own body and life.

As long as he stayed away from the woman- Emma Devenmore. Which he doesn’t because he loved her from their one night together when he was still part of the hero. But destiny along with Hell and Heaven have other plans for him.

The fans actually. Reno was killed off in my social media writings because I thought it was time. The fans thought differently. So I had to come up with a way to bring him back to life. And I did. And I am VERY glad the fans revolted because I love writing Reno and his new world of The Grid.

It is. It’s book one of the Shadow-Keepers series. There are five books total for the series. But there are going to be e-novellas in between the book releases where we show the backstory/history of the secondary characters.

The first such novella is of the god called Bounce. Then the second book in the series is Lust, which comes out in December. It’s the story of McKenzie Miller—a tough talking street kid who doesn’t take any crap. But she’s so wounded. She just doesn’t let it show. Reno and Emma are in all the books of the series however, since each book leads into the next book in a continual storyline. Yes, that’s right—cliffhangers.

Reno. Totally and without a doubt. The man has the MOST fun and does everything with a smile (he is insane after all). But also takes nothing for granted and appreciates everything. Has a childlike wonderment for even the smallest of things.

Probably mine (coming this next summer). Light and Dark. To be a person that could go to the High Council of Heaven or deep into the Keep of Hell? To see the different types of creatures and species that keeps it all running? I would love to see that. (It’s been called a Harry Potter for grown-ups.) 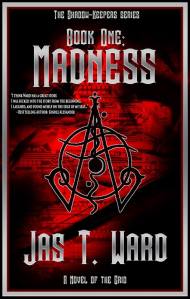 A night could change everything.
Consume a cold heart in heat…
Open a heart that has been closed…
Intertwine two lives for a lifetime…and beyond.

The only thing Reno Sundown has ever known is pain. How to take it and how to use it. He was created that way and once his purpose was done, he was locked away. Never had he known good, laughter, love until he met her.

Emma Devenmore has always focused on one thing, family. The eldest of her sisters, she has made life centered on protection. Protecting her family and doing her job of protecting others. A love story was never in her plans, until she met him.

By chance, their paths cross and both were forever changed. A Beauty left yearning for a Beast, who had opened her up to something she had never dreamed of.

A Beast left wanting for a Beauty, who had unlocked emotions he never knew possible, and never was supposed to know existed.

Once paths are crossed, can they ever be uncrossed? Once they are crossed, are they destined to grow together? Or can they only be consumed by complete Madness?

Jas T. Ward has always used writing as a necessary escape. With a past that is marred with a difficult childhood and domestic violence as well as being homeless as an adult, Ward lost her creative voice when she lost her soul mate to suicide.

Finding that creative voice once again in writing in social media via blogs and creative writing groups, it was the fans that encouraged her to put her literary weavings to paper for them to enjoy.

Ward lives in Texas with her dog and cat- Author Dog Pumkin and Writer Kitty Orleans and is the proud parent of three independent children.

When asked why she writes, Ward answers simply:

Reading saved me. It was my salvation and my haven. I now strive to pay that gift back by writing books that can give the same to others. And to keep myself sane.

You can find out more about Jas on his blog or on Facebook.

You can buy Madness on Amazon, Barnes & Noble, Apple Istore, and the Kobo Store.