Today I have on my blog author Cinthia Ritchie discussing her debut book, Dolls Behaving Badly. And after the interview, check out an excerpt from her book.

I was born in Pennsylvania but call Alaska my home. I’ve lived in Anchorage for the past 25 years and can’t imagine living anywhere else. The winters are long, dark and brutal and summers are often wet and cool but the twilight is like nothing else, the sky dimming but never darkening so that often I hike past midnight. Nothing compares to running down a mountain at 1 a.m., no one else around, the air hushed, the shadows tinted lavender. Sometimes I think that Alaska is in my blood.

I worked as a journalist for over 13 years and now freelance and write almost full-time. In the summers I often pick up seasonal jobs for extra money. As for finding time to write, I think that if someone wants to write, he or she will find the time. I wrote Dolls Behaving Badly as a single mother while working two jobs. I wrote segments at work, at my son’s soccer games and even jotted notes at the supermarket. It wasn’t easy but it was the only way I could write. After a whle, it became second nature.

I can’t imagine my life without writing, it’s so much a part of who I am and how I see the world. I can’t stop. I have characters inside my head that need to speak. Sometimes I think that I am simply a medium, that there are energy currents around us that use me to tell their stories. I don’t know if this is true. Sometimes I become discouraged and stop writing for a few days and mope around, feeling lonely. It’s almost as if I’m lonely for the sound of my own writing voice. When I sit down and begin to write again, I feel so strong and pure that I sometimes weep.

I was a single mother working two jobs, always tired, and at night after my son went to bed I’d sit in the bathroom and read novels. One night I realized that there were very few books with strong, single-mother heroines, and the few that did usually supplied fairy tale endings that left me, as a reader, frustrated and depressed because I knew by then that life wasn’t a fairy tale and endings were rarely clean. So I decided to write a book about a single mother, and I wanted her to be funny and warm and flawed, the way we all are, and I wanted her journey to be messy and real, and I wanted the book to include food and recipes and correspondences, and I wanted the love interest to be part of the story but not the whole story. I suppose I wrote Dolls Behaving Badly because it was the book I had been waiting to read.

No, the story didn’t stay the same but then again, does it ever? One of my creative writing professors once said that the moment your characters begin to dictate their next moves is the moment you know that you’re truly writing a book. That happened to me early on, by about the third chapter, and after struggling for a few nights I turned my book over to my characters. I wrote recklessly and without a plan. I had no idea what would happen next, where my characters would go, if or when the plot developments would intensify. I loved writing this way, loved the mystery and the wonder. Strangely enough, it all worked out. My characters carried me through the book.

What book are you reading right now?

I read multiple books at a time. I always have three or four going at once. Right now it’s Standing Up to the Rock by Louise Freeman-Toole; Drinking in the Rain by Alix Kates Shulman; and advanced review copies of The Irresistible Blueberry Bakeshop & Café by Mary Sims and Shorecliff by Ursula DeYoung.

I have a tattoo on my right forearm, a blue dolphin, because I love to swim. I got the tattoo about nine years ago when a man I loved dearly moved away from Alaska, and I stayed. I wanted (needed?) to etch a permanent reminder into my skin, to alter myself, to feel pain and then watch it transform into beauty.

This is my diary, my pathetic little conversation with myself. No doubt I will burn it halfway through. I’ve never been one to finish anything. Mother used to say this was because I was born during a full moon, but like everything she says, it doesn’t make a lick of sense.

It isn’t even the beginning of the year. Or even the month. It’s not even my birthday. I’m starting, typical of me, impulsively, in the middle of September. I’m starting with the facts.

I’m thirty-eight years old. I’ve slept with nineteen and a half men.

I live in Alaska, not the wild parts but smack in the middle of Anchorage, with the Walmart and Home Depot squatting over streets littered with moose poop.

I’m divorced. Last month my ex-husband paid child support in ptarmigan carcasses, those tiny bones snapping like fingers when I tried to eat them.

I have one son, age eight and already in fourth grade. He is gifted, his teachers gush, remarking how unusual it is for such a child to come out of such unique (meaning underprivileged, meaning single parent, meaning they don’t think I’m very smart) circumstances.

I work as a waitress in a Mexican restaurant. This is a step up: two years ago I was at Denny’s.

Yesterday, I was so worried about money I stayed home from work and tried to drown myself in the bathtub. I sank my head under the water and held my breath, but my face popped up in less than a minute. I tried a second time, but by then my heart wasn’t really in it so I got out, brushed the dog hair off the sofa and plopped down to watch  Oprah on the cable channel.

What happened next was a miracle, like Gramma used to say. No angels sang, of course, and there was none of that ornery church music. Instead, a very tall woman (who might have been an angel if heaven had high ceilings) waved her arms. There were sweat stains under her sweater, and this impressed me so much that I leaned forward; I knew something important was about to happen.

Most of what she said was New Age mumbo-jumbo, but when she mentioned the diary, I pulled myself up and rewrapped the towel around my waist. I knew she was speaking to me, almost as if this was her purpose in life, to make sure these words got directed my way.

She said you didn’t need a fancy one; it didn’t even need a lock, like those little-girl ones I kept as a teenager. A notebook, she said, would work just fine. Or even a bunch of papers stapled together. The important thing was doing it. Committing yourself to paper every day, regardless of whether anything exciting or thought-provoking actually happens.

“Your thoughts are gold,” the giant woman said. “Hold them up to the light and they shine.”

I was crying by then, sobbing into the dog’s neck. It was like a salvation, like those traveling preachers who used to come to town. Mother would never let us go but I snuck out with Julie, who was a Baptist. Those preachers believed, and while we were there in that tent, we did too.

This is what I’m hoping for, that my words will deliver me something. Not the truth, exactly. But solace. 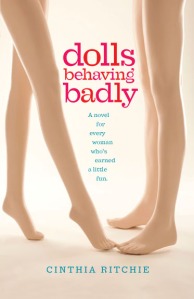 She’s one overdue bill away from completely losing control–when inspiration strikes in the form of a TV personality. Now she’s scribbling away in a diary, flirting with an anthropologist, and baking up desserts with the ghost of her Polish grandmother.

Still, getting her life and dreams back on track is difficult. Is perfection really within reach? Or will she wind up with something even better? 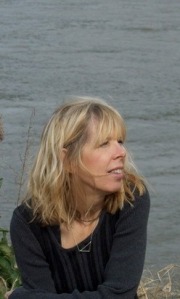 Cinthia Ritchie is a former journalist and Pushcart Prize nominee who lives and runs mountains in Alaska.

Her book, Dolls Behaving Badly, is available on Amazon, Barnes and Noble and IndieBound.