In March, right before my daughter’s fifth birthday, I wrote about my pregnancy with Lexie. I briefly mentioned she has situs inversus, an incomplete IVC and polysplenia. After that post, I received an email from a woman with a child with these same conditions. She commented that she had never met anyone whose child had those issues. This made me think back to the days when we found out Lexie had these conditions. I would have loved to have been able to talk or even just read up on another child with similar concerns. All I found online were medical journal which were not always easy to understand and sometimes just downright scary. I am writing this for all of those who find out their child has one or all of these conditions.

Situs Inversus is a congenital condition where the major organs are reversed or mirrored from their normal positions. This means the heart is on the right (also called dextrocardia). The stomach and spleen are also on the right while the liver and gall bladder appear on the left. This is a rare condition that happens in only 1 in 10,000 births. (There is also a similar condition –  Heterotaxy – where the organs are in different locations than the norm but not an exact reversal. There tends to be a wide variation in heterotaxy and from what I have read it appears to offer more complications.)

While Lexie’s situs inversus was diagnosed prenatally during my first sonogram, many people are unaware of their unusual anatomy until they go to the doctor for another unrelated condition or have surgery.

So what does having situs inversus mean for Lexie? Not much. It means that we need to let doctors know about her condition, so they know where her organs are during an examination. She probably should wear a medical bracelet or keep information with her that states she has situs inversus just in case she is ever unconscious and can’t relay this to the doctors.

It also means that organ transplants could be a problem in the future since most organs are donated from people with the organs in the standard layout. (situs solitus) (I will briefly talk about some of the tests they performed on her at birth related to her situs inversus in my next post.)

One of the first things I remember reading after she was diagnosed at 16-week gestation was that actor/singer Donny Osmond also had situs inversus. It was not discovered until he had appendicitis as an adult. His doctor originally misdiagnosed it since his appendix was on his left side instead of his right.

As an author I have to point out situs inversus can easily be incorporated into your plot. You can have someone survive being shot because their heart is on their right side. Wikipedia use to have a list of notable fictional characters with situs inversus, but it has been since taken off the webpage. I found this webpage that still contains that original list.

At the same sonogram where Lexie was diagnosed with situs inversus, they also noted that her inferior vena cava (IVC) was what they called interrupted. (This too is rare, happening in 1 in 5000 births.) Of all the things diagnosed with Lexie, this is probably the hardest to explain without too much medical jargon. 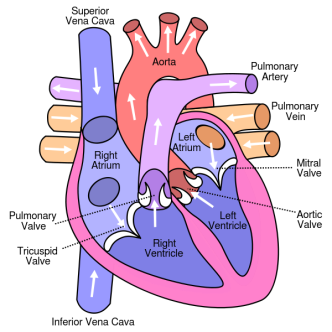 Your IVC brings blood from your lower extremities and should connect to the right atrium of the heart. In Lexie’s case, instead of continuing to the heart, this vein joins another vein (hemiazygos) and continues to the superior vena cava which then connects to her heart.

A pediatric cardiologist did a fetal echocardiogram at 27-week gestation to ensure that Lexie’s blood flow and heart were working properly. He explained it to me using math. If a normal person’s blood flow was the same as 2+2=4, then Lexie was like 1+3=4. You get the same answer but just slightly different way of getting it. In other words, everything was fine in her case.

Again, what does this mean for Lexie? Not much. Doctors will of course need to know about this prior to surgery, but it hasn’t affected her one bit so far. The worse thing has been trying to get health insurance companies to understand that and not deny her coverage which they have on two different occasions.

While neither of these rare conditions affects Lexie’s daily life now, they (along with a diagnosis of a hole in her heart) did point toward her having either asplenia (no spleen) or polysplenia (multiple spleens) which I will discuss in a separate post.

Basically, I guess what I want parents who find out their child has situs inverses to know is that it will have little effect on their child but could point to other conditions. As for the interrupted IVC, in many cases the blood still flows in a manner that works for your child but you may have to see a specialist to verify this.

If anyone has a child with either of these two situations, feel free to contact me. I am not a doctor and have no medical training but I have been there when you are feeling overwhelmed by everything your doctor is telling you.